ATLANTA (AP) -- Several satirical news Websites have file suit in federal court in Atlanta against ESPN alleging the sports network has infringed on their intellectual property. The suit comes days after ESPN announced that the network was removing reporter Robert Lee from the University of Virginia home game on September 2.

Kurt Mueller, COO of The Onion, said that the network's actions are "a clear infringement of The Onion's intellectual property. This should be an open and shut case. After all, when news of Mr. Lee's reassignment was announced, social media exploded with questions asking if it was a post on The Onion." The topic was trending on Facebook and Twitter.

I received an email from Google last week. I'm not sure what to make of it. Let me first take a minute and give you some idea of how Google and this little blog are intertwined.

The domain name of this blog, basilsblog.com, is registered with Google Domains.

This blog is hosted by Google, via their Blogger platform.

I could register the domain elsewhere, and I could host it somewhere else, but Google's reliability and pricing are hard to beat.

One other thing that isn't directly blog related, but worth noting is that Google also has a Web browser that is quite popular, called Chrome.

Got all that? Good.

Now, that email I got from Google. It's from Google Search Console, actually. It said: 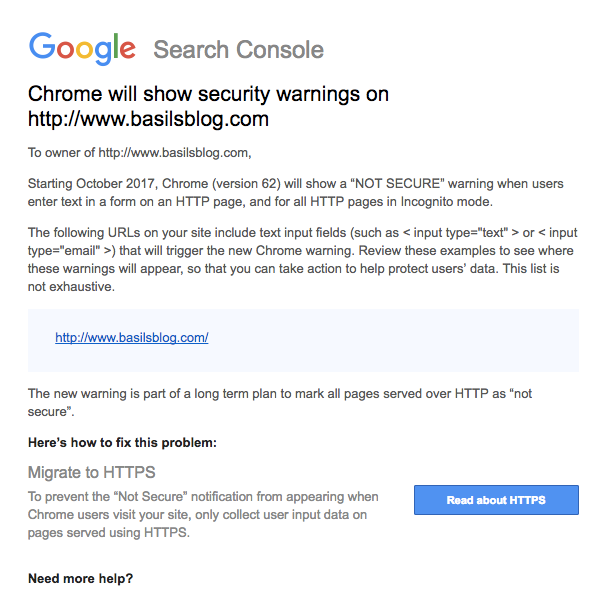 Starting October 2017, Chrome (version 62) will show a “NOT SECURE” warning when users enter text in a form on an HTTP page, and for all HTTP pages in Incognito mode.

The following URLs on your site include text input fields (such as <input type="text"> or <input type="email">) that will trigger the new Chrome warning.

So, I it would be a good idea to enable https on the blog, right? Only...

Warning: HTTPS is currently not available for custom domain blogs.

Which means that, as long as I'm hosted at Google on their Blogger platform, and have my own domain name, I can't enable https.

So, all together, this means that Google is warning me that I don't have https enabled on my Website that they host and don't allow https for Websites like mine.

Catch-22? Maybe. Or maybe I need to move back to another platform and host for this little blog. Which I don't really want to do.

Until recently, I hadn't been to Walt Disney World in two decades. The last trip was one with my daughter and son in the mid-1990s.

When I was younger, a teenager or thereabouts, I had been to Disney World a few times. It was always a big deal and I always enjoyed it.

Of course, back then, they had the tickets (I think they actually called them "coupons") designating different attractions. A ticket, B ticket, up to E ticket. I always spent my E ticket on The Haunted Mansion. Love that attraction.

Note: Here's another link showing different attractions on some of the tickets.

When I took the children in the mid-1990s, that was, I believe, my first experience without the ticket books. That was great in that I didn't have to choose among certain attractions. The downside? Neither did anyone else. That meant the most popular attractions had long lines. That did put a little damper on things, but I focused on making the trip as enjoyable as I could for the children. I'm not sure how successful I was, but they did seem to enjoy it.

When I became a grandparent, I wanted to take the grandchildren to Walt Disney World. There were some catches, though. When the first grandchildren were born, I wasn't living in southeast Georgia where I grew up. The Columbus, Georgia area is a good six hour drive from Walt Disney World. That meant over 12 hours driving on the trip. Two adults, three children, in a single car, for that time and distance? Not comfortable.

Then, the long lines. Yes, Disney had introduced FastPass, but I didn't know much about that. I can be a quick study on some things, but honestly, I didn't do proper research into it. That's changed, as you'll soon see.

Oh, and the cost of driving and eating and hotels, not even counting the price of admission of adults and three grandchildren. All in all, an expensive proposition. And, it was something we never did. But, it was something I wanted to do.

Now, years later, I have more than three grandchildren. And I still wanted to get them to Disney World. Well, the two year old might be a little young to appreciate it. He'd get almost as much fun out of a sprinkler in the yard, but the day is coming soon. However, he has been to Disney World. More on that in a bit.

While I did want to take the grandchildren to Disney World, there were attractions much closer to Columbus than the one in Orlando. Atlanta has Six Flags over Georgia and Stone Mountain Park. We managed to take the grandchildren to each of those a few times. Even bought year passes for each at different times, but ended up not going that often. Work schedules, school schedules, and self-imposed restrictions that I thought were kinda silly (no, I won't elaborate), all contributed to making it not as often as would have been nice.

Still, the occasional trip to Six Flags or Stone Mountain did happen. Six Flags over Georgia and Stone Mountain Park are great places to visit. What they don't have is the "Disney mystique." I mean, you don't hear Super Bowl winners saying "I'm going to Stone Mountain!"

This year, though, I've been to Walt Disney World twice, and am gearing up for a third trip.

This year, at the last minute, my daughter asked about our going to Disney World along with her, her son (my grandson), and her mother (my ex-wife). This was like two days before they were scheduled to go. I was open to the idea. Ex-wife and I get along fine. There's not a bunch of tension in the room when we're in the same place. We've had troubles in the past, but I'm not going to dwell on them, and neither is she, it seems. So, I said if I could work it out (that always means funding) we'd be delighted to go.

Actually, it turned out to not be "we." Wife didn't go. That nearly put a damper on things. Ex-wife expressed concern about that, but after talking with my daughter, it came down to my decision, and I went. And I enjoyed it during the time I was there. I didn't stay for the entire time they were there, but did have a blast riding the rides with my grandson. He rode the rides with me most of the time.

Seeing how much fun he was having made me decide to get the other grandchildren to Walt Disney World. Before I left Orlando, I was already setting things in place for a trip with the other five-year-old.

Wife still didn't want to go, so I ended up taking his brother and sister, both 17, a week later. They were great at keeping up with their brother, and had a fun time. Granddaughter in particular really enjoyed it. From my daughter, I had learned how to work the FastPass+ feature using the app for my iPhone, along with another app. That made the visit a lot more enjoyable, as we never waited in line more than 10 minutes for anything. Okay, there was one 20-minute wait for one ride, but only one. Everything else was either FastPass+ or short lines by noting the wait times on the app.

Right now, there's one more grandchild that's still in school (she's also 17) that hasn't been to Disney World. That's being remedied Labor Day weekend. And, this time, I won't be the only adult in the car. Wife is finally going. She went decades ago, before we met, but I don't think she particularly had a good time. Maybe that'll be different this time around. After all, I'm such a delight to be around.

Oh, remember that I mentioned that one granddaughter really enjoyed her trip? Well, she wants to go again. Only, I had to tell her "no." I explained that I wasn't going to take her twice and the others once. And my focus was on getting her cousin there, and that I wasn't going to buy her another ticket just yet. Undaunted, she said she was working and asked what if she bought her own ticket. I told her that, of course, we'd take her along. Which changed my "no" to a "yes." So, she bought her own ticket. This trip will be two adults (Wife and me) and two teenagers (cousins), which will mean the car is as full as it can be, what with luggage and a six hour trip. I am so looking forward to this trip with three of my favorite people.

There are still a grandchild that's in college. I have an idea how to manage getting her to Disney World. And, there's another that's not in college. We've discussed how to deal with that, too. We will work something out.

I don't really hate TiVo. In fact, I love my TiVo devices and the TiVo service. Sure, they're expensive, but they are top notch devices and the service is outstanding. Let me emphasize again, I love TiVo. But, I also hate it.

The problem isn't the cost. I willingly spent the money for devices and for lifetime service.

I first got a TiVo device back in 2006, and have been a fan through all the years, upgrading as time went on. And, after my pleasure of working with a TiVo Roamio, I was excited when the features of the newer TiVo was announced a couple of years ago. I was ready to upgrade my TiVo Premiere and anxiously awaited the release date.

Then I saw one. 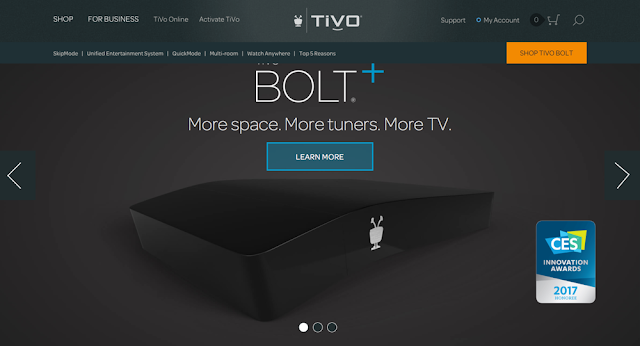 I am not putting something that looks like that in my house. I don't know what kind of crack they were smoking, but I won't get near that thing.

Sure, the specs are great. And, if it looked like something a normal person would have in their house, I would have bought one when it came out.

But, I'm not spending my hard-earned money on something so stupid looking as that.

So, I decided to wait. Surely, they'll make something that a sane human being wouldn't be ashamed to be seen near. But, as the years have passed, there's been no indication that they're going to fix that abomination any time soon.

I've spent a decent amount of money over the years, purchasing a Series2 (that should have been my first indication that their brains were cockeyed when they left out the space between "Series" and "2"), a Series3, multiple Premiere, and a Roamio.

Speaking of Roamio (stupid name, another flag I missed), I have an OTA that is sitting in a box. But, where I want to use it -- that is, where I currently have a Premiere running -- has a cable package. There's no antenna, and the location is far enough away from TV towers that an indoor antenna won't do the job. And I'm not going to go through the time, trouble, and expense of putting up a sufficient tower and antenna. So, there's a Premiere still running there, not a Roamio (which I'd buy if I could find a new one that supported cable card) or a Bolt (which looks stupid as hell).

So, I'm hating on TiVo. The dumbasses at TiVo that came up with the idea of the appearance of the Bolt, and the dumbasses who won't put a decent-looking device out in its place.