I upgraded my phone recently. I've had an iPhone 6s for s couple of years, but now, I have the iPhone X.

When they announced the iPhone X -- it's pronounced "ten" as in the Roman numeral, and only silly people call it the "ecks" -- I decided against getting one. The reason? Well, the $1000 price was part of it, but so was the size. Or what I thought was the size.

I never got any of the "Plus" series phones, which had a 5½-inch screen. My daughter, son-in-law, and ex-wife all had a "Plus" series iPhone, so I had the opportunity to put hands on the device. I didn't like it. It was a little too big. Maybe I would have become used to it, as I did the 4.7-inch screen of the iPhone 6 and iPhone 6s, but I didn't want to.

When the iPhone X was announced, I found out it had a 5.8-inch screen. So, in my mind, it was even larger than the "Plus" series, and if the 5½-inch "Plus" was too big, the 5.8-inch iPhone X would certainly be too big, right?

The iPhone X screen covers nearly the entire front of the phone, meaning there is more screen per total phone size on it than on other iPhone devices. So, after I put hands on an iPhone X and realized it was not noticeably larger than my current phone, one of my objections was removed.

Well, I found a way. Or, more properly, the way was always there. You see, I have an old Verizon plan. It's a 30 GB plan, and I have a pretty good price on it. 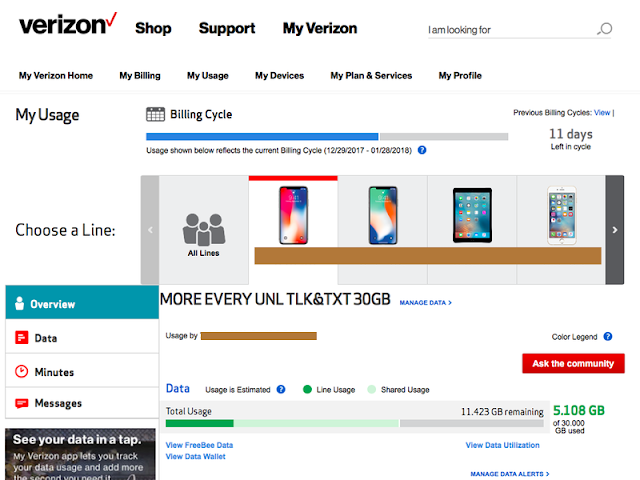 By the way, they stopped that offer after a couple of weeks when they realized what they were doing.

Now, I am paying $40/month to connect each device. For their Unlimited Plan, it would drop to $20/month to connect, but the cost of the plan (Unlimited vs 30 GB) would increase, and the overall bill would be higher.

Now, there's one other thing, and it makes all the difference. As part of the Verizon Edge plan (told you my plan was old) I get a discount for financing devices. The $40/month drops to $15/month, which is less than $20.

There's another way of looking at it, though. If I play down enough to leave $600 owing on the phone, my monthly payments for the phone will be $25/month. That's the amount of the discount. It's like getting $600 off the cost of the phone. Meaning I can buy an iPhone X for $400.

Now, every time I go into a Verizon store for anything, they try to get me off the plan I'm on and onto an Unlimited Plan. I'm not budging. You see, that 19% work discount isn't applicable on an Unlimited Plan. So, I'd lose that. I'd also pay more for the plan. And I'd pay more for a phone, about $120/device. ($40/month becomes $20/month, but no Edge discount, meaning a higher net cost per phone.) The total cost would be more.

I'm staying on the plan I'm on.

Oh, I was planning on writing about the iPhone X and what I thought of it. Then I got sidetracked.

Did you watch the Rose Bowl? Are you missing the Sugar Bowl? Yeah, I'm a fan of college football, and you know that I am watching the Rose Bowl (overtime). I wanted to watch Georgia get a chance to play for the national championship, so, after spending the weekend fighting a cold, I watched the Rose Bowl.

Why did I care about Georgia winning? Maybe being from Georgia has a little to do with it. I haven't been allot to go to a lot of college games involving the Bulldogs over the years, but 37 years ago, I managed to make it to two games. I mentioned back in November about the 1980 Georgia-Florida game, the first UGA game I went to. The second? The 1981 Sugar Bowl, which was at the end that Georgia's magical 1980 season.

I lucked out and got four tickets. I took my girlfriend, her brother, and some chaperone her folks sent along. Stayed at a cousin's apartment in New Orleans, went to the game, and had a good time.