From LA Times Top of the Ticket...

Compare and contrast the crowds' reactions to these two men: 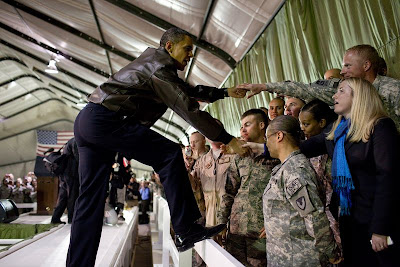 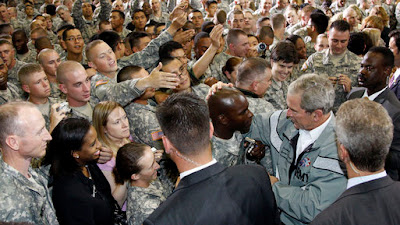 Caleb Howe of RedState has been going through a rough patch.


Caleb Howe is one of the valuable members of our community who does tremendously good work. As you know, Caleb has put many hours of time and effort into RedState and broken major stories you’ve probably read here. If he was a left-winger, he’d be one of scores of full-timers bankrolled by George Soros and left-wing interest groups, and wouldn’t have to worry about making a living. And right now he could use some help. The Obama economy has done him and his family no favors and he has been without a job for some time. With bills to pay, including a mortgage, kids to feed, and an internet connection that has to be paid for, its tough.

Email ThisBlogThis!Share to TwitterShare to FacebookShare to Pinterest
Labels: Conservatives

Wife no longer gets to pick where we eat lunch. Place she picked yesterday had a big ol' picture of Obama on the wall. Food was good, but...

Three men were arrested on sex charges at Gwinnett County, Georgia Kmart. More proof that Kmart is teh ghey.

So, the Hutaree bombs are WMDs, but what Saddam had isn't? If only Saddam had claimed to be a Christian...

Erykah Badu's clothes were actually removed by a man on the grassy knoll.

A Columbus, Georgia woman attacked a man with scissors. If only the man had a rock. Because rock beats scissors. But then, the woman may have had paper...

Maybe Obama never heard a single sermon Jeremiah Wright gave because he was never there.

The president hasn't been attending church, and now says he won't be joining any church. He's be too much of a disruption:


"I think obviously he shares the strong belief that there's a very personal nature to one's spirituality," White House spokesman Robert Gibbs told reporters last June. "And for it to be -- for his presence to be disruptive [at a public church], I think he believes that takes away from the experience that others might get and he certainly doesn't want to do that."

He has a point. How could God keep worshipers attention when Obama is in the building?

Of course, President George W. Bush didn't join a Washington church, either, but he regularly attended the Episcopal church across the street from the White House. (Bush is Methodist, but his parents George and Barbara are Episcopal.)

Obama isn't missing out on his daily dose of devotion. He gets them sent to his BlackBerry.

Why Obama should abandon his socialist agenda

Obama might want to rethink his plan to socialize everything.

If he succeeds in turning America into a socialist country, he just might be in trouble. Look what happened in North Korea:


North Korea has executed a senior official blamed for currency reforms that damaged the already ailing economy and potentially affected the succession, a news agency in South Korea reported today.

Pak Nam-gi was killed by firing squad last week, said Yonhap, citing multiple sources. The Workers party chief for planning and the economy had not been seen in public since January.

The 77-year-old was put to death as "a son of a bourgeois conspiring to infiltrate the ranks of revolutionaries to destroy the national economy", the agency said.

In socialist countries like North Korea, you can get the firing squad for destroying the economy.

Why didn't I think of this?

I have never been a huge fan of Michael Steele. In Steele's defense, he's exactly what he's always been: a Republican politician. And more politician than Republican.

Lots of Republicans took up his cause during his run for Maryland Lt. Governor, after the Oreo Cookie incident. After his loss in the 2006 Senate race, Steele became chairman of the Republican National Committee.

How has he done? Not all that great. But, really, could anyone? Look how the Republicans have acted over the last several years. Overall, they've been Rockefeller Republicans. I can't imagine having to deal with those Republicans that abandoned the conservative base, so I can't fully fault Steele for the way the party has imploded.

On the other hand, Steele has been guilty of abandoning the conservative base. He's talked it up at times, but he's also fallen into the trap of criticizing Republicans, a violation of the Eleventh Commandment: "Thou shalt not speak ill of any fellow Republican." And he lost the base in the process.

He's probably done about a good a job as any traditional politician who is also a Republican. But he's doesn't have the support of the conservative base. And the head of the GOP needs to have that support.

Who should be the head of the RNC? 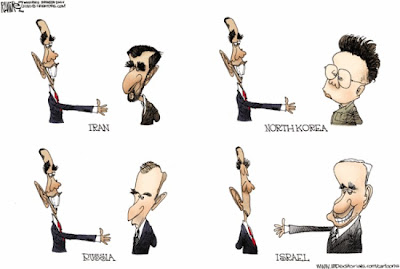 Apple's rotten logic. Or is it?

Word is that Apple has pulled advertising from Fox News.

The whole issue is Glenn Beck. Howard Kurtz, writing for the Washington Post, says Apple is one of many to pull their advertising:

More than 200 companies have joined a boycott of Beck's program, making it difficult for Fox to sell ads. The time has instead been sold to smaller firms offering such products as Kaopectate, Carbonite, 1-800-PetMeds and Goldline International. A handful of advertisers, such as Apple, have abandoned Fox altogether. Network executives say they believe they could charge higher rates if the host were more widely acceptable to advertisers.

An intelligent person would say that if Glenn Beck is the problem, don't advertise on Glenn Beck. Pulling all ads from Fox News, when they have such higher ratings than all the other news outlets, seems silly.

has delayed shipping the iPad.

Perhaps Apple is growing too fast. They've had a niche market for so long, success may spoil them. So, pulling ads from the highest rated news channel -- and the number two overall cable network, behind USA -- may be a way of keeping themselves from straining themselves, while, at the same time, making the loony left happy.

I'm trying to understand some polls I read this week:
I find that interesting. And disturbing.

Look at that again: Only 27% say we're remain the most powerful nation, while 47% approve of Obama.

If all 27% are part of that 47%, then 20% of Americans recognize and are okay with the weakening of our country.

But, I don't believe that all 27% are Obama supporters. I suspect most of them think we'll remain strong despite Obama.

If none of those are Obama supporters, then 47% of Americans recognize and are okay with the weakening of our country.

At least 1/5 -- and possibly almost 1/2 -- of this country recognizes that Obama is weakening the nation ... and are okay with that.

If this was true, liberals would oppose it

An article in the Washington Post says that universal health care actually lowers the abortion rate:

As proof, they quote the U.N.

And everyone knows just how reliable the U.N. is.

Ryan's, raids, raunchiness ... and other news

I don't want to eat at Ryan's. But I do want to eat wherever it is they film their commercials, because the food there looks great!

Obama was out of the country? Okay, who's got fired? Did everyone survive?

Usually, when he leaves, someone resigns or something. Sort of like when Al Capone went to Florida, somebody on Chicago's North Side would wind up on the floor of a barber shop or face down in his soup. It's the Chicago way.

How does Obama deal with the threat of Islamic terrorists? He raids Christian militia groups. Don't get me wrong, I'm not taking up for the Hutaree -- who, by the way, sound like something out of Star Wars. But I can't help but wonder if this isn't a prelude to demonizing the Christian right.

Okay, an increase in demonizing the Christian right.

2000 words about America and Democrats

If a picture is worth 1000 words, then Elwin over at Ramsomed has 2000 words about America and the Democrats.

The grass is greener, right? Check out the first picture.

Democrats to the rescue, right? Check out the second picture.

Email ThisBlogThis!Share to TwitterShare to FacebookShare to Pinterest
Labels: Democrats

Ignoring Reagan while waiting on him

Many Republicans ... certainly many conservatives ... have said we need another Reagan.

Some of the same ones say that the GOP needs to clean house, replacing liberals and moderates with more conservative candidates.

I don't disagree with either. And they are not mutually exclusive. But many are going about it the wrong way. And I've been guilty, too.

The conservative movement needs someone like a Ronald Reagan. Perhaps he ... or she ... is already there, just not yet fully realized. But, I have faith that it'll work out.

The other piece of the puzzle is getting conservatives in office. In Florida, for instance, everything is pointing to Marco Rubio winning the Republican nomination for Senate over that state's governor, Charlie Crist. And that's a good thing, since Rubio is the true conservative in that race.

But we need to be careful. We don't need to be criticizing Republicans already in office that aren't conservatives. You know. RINOs. Like GOP chairman Michael Steele. Or John McCain. Or Lindsey Graham. Or...

Now, I might be ruffling some feathers when I say don't criticize them. Because those Republicans are often criticized by other Republicans or conservatives.

I say again: we shouldn't be publicly criticizing the RINOs.

We should be following Ronald Reagan's example: "Thou shalt not speak ill of any fellow Republican."

But it would be just plain wrong to violate the teachings of Ronald Reagan while we seek out the next Ronald Reagan.
More comments at IMAO.
By Basil at 3/29/2010 07:40:00 PM 1 comment:

Yesterday, Maggie's Notebook wrote about a comment made by Florida governor Charlie Crist. It's wasn't flattering:

Like this little blog, Maggie has ads from Google on her blog.

Google will target ads based on content. Only, it's not perfect. As you can see here in this ad that appeared above her post: 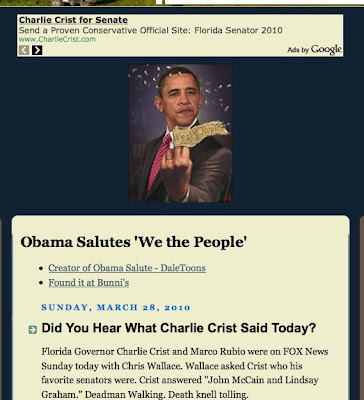 There are two schools of thought:
I'm certainly not being critical of, or even poking fun at, Maggie. This is simply the instance that happened while I felt like blogging about it.

And, it'll happen here. I have configured the ads here to refrain from showing certain ads (I fall into camp 2, above). But there's no way to catch them all. Which is fine (I also fall into camp 1, above).

He also says his favorite Senators are John McCain and Lindsay Graham.

Which explains why the Florida governor is trailing former State House Speaker Marco Rubio -- badly -- in the latest polls.

Rubio looks to take the Republican nomination. And that would be a good thing. He's leading Democrat front-runner Rep. Kendrick Meek (D-FL-17) in future-looking head-to-head polls.

As long as faux-conservatives like Crist (who also leads Meek head-to-head) get elected, the country won't improve. Of course, Crist is better than the typical Democrat.

Hitler finds out that Sandra Bullock wouldn't attend the German premiere of "The Blind Side" because of Jesse James' indiscretions...

From the movie Lenny

Here's how Adobe describes it:

Use the revolutionary Content-Aware Scaling feature to automatically recompose an image as you resize it, smartly preserving vital areas as the image adapts to the new dimensions. Get the perfect image in one step without time-intensive cropping and retouching.

And, based on this video, it looks great:

But, it has other applications, too...

Still not too late to evaluate Obama

CBS still has it's "Grade Obama's First Year in Office" poll up.

He's right. Just in case they take it down, here's the current tally.

Oh, and if you are an Obama supporter, remember this is what the letter grades mean: