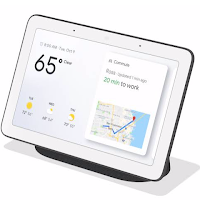 Actually, I didn't lose it. It was taken from me.

An afternoon storm caused a power outage. The outage corresponded to a very loud pop from the next room, the room where all the Internet hardware is located. When the power came back on, the Internet didn't.

Now, losing Internet for a bit isn't really that big of a deal. It's even softened a good bit when the phone still can connect, so I wasn't completely cut off. But, home Internet is more of a big deal now that I've added some smart devices around the house.

That doesn't sound like much, but when you get used to it, it's kinda jarring when it's gone. And Google was gone.

Rebooting the system a couple of times didn't help. I own my own router. But swapping out the router -- twice -- didn't fix it. It was the modem maybe? I own my own modem. But swapping it out didn't really make any difference. So, I contacted Comcast. Actually drove to the local office -- not a full company store, but still a Comcast location -- and spoke to them.

The nice lady said they'd be able to get someone by on Thursday. Not this Thursday, but next Thursday. 10 days later.

Time to try another tactic. I added a Comcast modem to my account, and walked out with it under my arm. Here's my thinking: An issue with my service takes 10 days to get a tech to come by. But a new hardware setup, a Comcast-provided device, gets priority.

Got home and though it took an awfully long time to navigate the menu system and wait on hold and then wait for Michael (that was his name) to finish the setup the store didn't finish, I finally got back up and running. Took a couple of hours overall, but that included my own troubleshooting, a trip to Comcast, then the whole new hardware setup. But, as I said, I was back up and running.

Google was back! I no longer had to reach over and turn on a light switch if I wanted light.

I actually said, "Hey Google, I missed you."