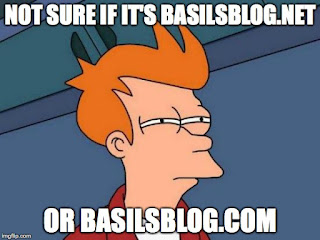 Or maybe you didn't notice.

Actually, it doesn't really matter. When this little blog launched, back during George W. Bush's first term in office, I didn't have my own domain name. I did shortly afterwards, and bought both the .net and .com domains. I intended to have one as the primary one, and have the other as a redirect URL. I also changed hosts around that time. During all that clutter -- I want go into all the how this happened and how that happened because then we'd be here all week -- it worked out that basilsblog.net ended up being the URL of the blog. I really meant to change to the .com URL, but one thing or another -- no actual valid reason -- meant it stayed with the .net domain.

Well, as part of my recent consolidation of all my domains under a single registrar, I decided to finally get it right, and go with the .com address.

I have an email address under the .net domain, and that still works, but a .com version works now, too. It's easy when everything's under one registrar and they make it easy to configure it like you want. Well, easier.

Anyway, it's now basilsblog.com -- not that it means anything. Because the .net still works, only now that is the one that redirects to the .com address.

Email ThisBlogThis!Share to TwitterShare to FacebookShare to Pinterest
Labels: Blogging

Spammers are the lowest form of life on the Internet. And probably in real life, too.

So, guess who has been spamming me for some time now. If you guessed Democrats, you'd be correct.

I check my spam queue from time to time and keep seeing emails from Barack Obama, Hillary Clinton, and the rest of that band of low-lifes. They are in the spam queue because after I first began receiving emails from them, I clicked the "Unsubscribe" link. What happened? Even more.

No, this isn't some spoofing of Democrat Party email. It's the real thing. Sending me emails I didn't ask for and don't want. Spammers.

As I said, I check my email spam queue from time to time just to ensure something legit isn't being directed that way. Every so often, that happens, but not much. Still, I check.

I don't open the emails from Obama or Clinton or any of those ne'er-do-wells. But, I do see the subject of the email. And they have taken to calling me "Friend."

Network Solutions made me angry recently. And, they lost a little bit of business.

Now, I realize I'm not a major customer of, well, anybody. Okay, maybe Papa John's Pizza or Firehouse Subs. But, that's about it. So, no big loss, right?

But here's what happened. Naturally, the story begins with something else entirely.

It began with a reissue of a card. You've probably had cards reissued from time to time, and for a variety of reasons. Sometimes, it's because a merchant made an "oopsie" and let your data get compromised. Sometimes, that led to cards being reissued with new numbers.

Now, when that happens, any standing payments you have set up -- Netflix, Hulu, iTunes, etc -- need to be accessed and changed to reflect the new card number (or a different card, if you want). Otherwise, they'll attempt to bill you and it gets declined and then you get an email and they think you're a slacker.

Well, when this particular MasterCard was reissued with a new number, I was proactive and got all the standing payments edited. Except for one: Network Solutions.

Now, I've dealt with Network Solutions since the 1990s, when I registered my first domain name. Been using them ever since. Yes, I know other registrars are cheaper. But, Network Solutions is well established, and I just felt comfortable dealing with a company that has been around for a bit. Think of the British Bank scene and song from Mary Poppins.

Renewal time came around for various domain names -- I'm currently down to 17 -- and I'd simply renew, sometimes for multiple years if the savings enticed me.

Well, I knew a renewal was coming up for one of mine in October. It was August, and I remember seeing an email around 90 days out that a domain was expiring. The email contained one of their typical 23% off (or something like that) deals. Got plenty of time, right?

Actually, no. In August, they billed me for a renewal of a service that expired in October. Only, they failed, because, you guessed it, it was was set up for that reissued MasterCard. So, I got an email telling me my purchase had been declined.

As of now, I have no more services with Network Solutions. I began moving domain names away from them that afternoon. Didn't do them all at once, just started with the next one due, and began the process. I have no more with them. We're done.

For what it's worth, I'm using Google to register the domains now. I had a couple with GoDaddy, but their interface is a pain in the ass. Can't find anything, and some interfaces break very easily. Maybe they should look into hiring some Web programmers. Anyway, GoDaddy was all primed for all my business from Network Solutions, except their interfaces suck. But, Google's plain jane interface suits me just fine. They have 16 of my domains, and I'm awaiting a hold on my remaining domain to end so I can move it from GoDaddy to Google.

Email ThisBlogThis!Share to TwitterShare to FacebookShare to Pinterest
Labels: Web/Tech

Email ThisBlogThis!Share to TwitterShare to FacebookShare to Pinterest
Labels: Humor

And now for something completely different...

I saw something that made me quite sad today. USA Today reports that Monty Python founding member Terry Jones has been diagnosed with dementia.


In a statement released by Britain's film academy (BAFTA), a representative says the 74-year-old has primary progressive aphasia, which erodes the ability to use language. As a result, Jones can no longer give interviews.

News of Jones' illness came in a statement announcing he is to receive an award for outstanding contribution to film and television from the academy's Welsh branch.

I met him, sort of, in Atlanta a year or two ago. Yes, it was at DragonCon, but I didn't see him in a panel. I ran into him walking down a street in Atlanta.

I was on Courtland, walking toward the Sheraton for an event -- or to wait in a long line for an event. And Terry Jones was coming the other way, toward the Hilton/Marriott area, walking at a fairly brisk pace. I saw him when I was about, oh, 20 or 30 feet away. I knew I was reacting to seeing him, but lost all control of my facial features.

I could feel the smile spreading across my face and I knew my eyes were opening wide, but I couldn't do anything about it. I mean, it was Terry Jones.

He noticed. He looked me in the eye and grinned. As we passed, I said, "Good afternoon, Mr. Jones." Only it probably came out something like "derp durr hurr."

I so wanted to shake his hand, to hear him speak, but he had somewhere he was going, and there were opportunities to see him in panels and at autograph sessions. I regret not scheduling something like that. And, so it appears, I'll never have the opportunity.