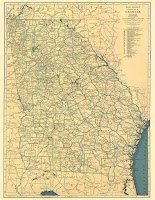 The occasion came up recently where I recalled one of my earliest memories. It came about in a roundabout way, as things often do. Let me tell you what the memory was first, then I'll tell you about how it came about to be thought of recently.

I remember riding in the car, in the back seat, of course, with my mother driving and my father in the passenger seat, and her getting pulled over by a policeman.

Now, my mother didn't often drive if it was both my parents going somewhere. I don't recall thinking anything about it, because I had ridden with her driving many times, but, thinking about it later, she was the only parent in the car. Her driving this time, though, was because my father was ill. I don't recall what happened, but he took ill why we were off visiting family in Liberty County or Bryan County or somewhere. I got family all over southeast Georgia, but this particular visit was to either Liberty or Bryan County.

Anyway, I was in the back seat -- don't remember who else might have been there but nobody stands out -- with my father in the passenger seat, leaning over to his right, trying to rest on the door or window. Maybe he had a pillow, I don't know.

Somewhere along the way, maybe on US-17 or US-82, a policeman pulled us over. I don't remember much about the policeman at all. Maybe he wore brown, which would have made him a deputy sheriff, not a policeman. I'm really not clear, because this was years ago. I don't recall what BS reason he gave for pulling my mother over, but we figured it was because a woman driving with a man slumped over in the passenger seat probably meant an easy arrest for public drunkenness or something. He didn't seem to do anything other than check out the situation, realize there was no money in it, and let us go.

I've never spoken with anyone about that, although I've thought about it many times over the years. Recently, a conversation came up about that situation, and I had my first conversation with others about it.

My Big Sister, who's 5'4", mentioned remembering it, too. And she remembers it pretty much just like I do. We had never talked about it in the decades since it happened. Not avoiding it, just never came up.

Only, it turns out we don't really remember it at all.

You see, my mother was telling us about something that happened in 1955, before I was born. And before my older sister was born. We weren't there. Well, I certainly wasn't. She was still a month or two from making her debut into the world.

It's a really odd feeling to find out that something you remember is something you couldn't remember because not only were you not there, you didn't even exist. Odd indeed.
By Basil at 11/22/2017 10:30:00 AM 2 comments: