Yes, the birth certificate is real

Now that Barack Obama has finally released his birth certificate, you would think that people would get back to more important things. But you'd be wrong.

Not everyone is convinced it's real. But the evidence indicates that the birth certificate is real. 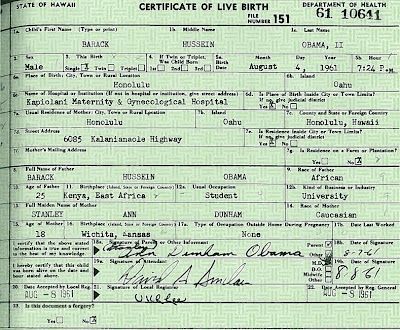 Now, let's look at the items that some are still questioning.

Notice that the pattern background continues straight, while the paper itself curves down into the binding of the book in which it is contained. 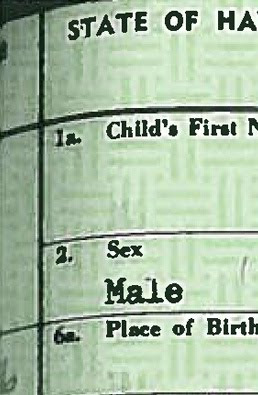 There is a simple reason for this: The background actually curves up on the real document. This was a common practice in Hawaii in 1961. Hawaii had only been a state for a short period of time. Remember, the United States only got Hawaii after Franklin Roosevelt stole it from Japan to start World War II. Within 25 years after the end of that war, Hawaii was made the 57th state.

People knew that children born during those first few years wouldn't even become eligible to be president until 1995. And that anyone born during those first few years would come under intense scrutiny. So, in order to assist those future examiners of documents, it was decided to make the background on documents curve up, in order to offset the natural downward curve that appeared when a bound document was photographed.

How did they accomplish this? Remember, we stole Hawaii from the Japanese. And Hawaii was Japan's leading technology testing ground. The Japanese developed upward-curving background images in labs.

Other Japanese technology we uncovered in Hawaii would be used to fake the moon landings from 1969-1972.

Race of the father

Notice that the race of Barack Hussein Obama, the father listed on the birth certificate, is listed as "African."

Some might wonder why "African" was used rather than "Negro," "Black," or even "Colored," as was often the case in many states at the time.

The reason is simple: In order for the child to be considered an African-American in later years, the father would have to be listed as "African."

It is true that the mother is listed as "Caucasian," rather than "American," but that was a common practice of those unenlightened times.

One other note: if the document was a forgery, the forgers would have made the mistake of listing the father as "African-American." Instead, the "-American" was omitted, proving that it's not a forgery.

Some aren't certain that the registrar's signature is real.

It's easy to see that it is, if you just look at it. It says "Ukulele," which, as everyone knows, is of Hawaiian origin.

If the document was a forgery, the signature would have said "Banjo" or "Guitar" or even "Orutu" or "Nyatiti." But it doesn't. It says "Ukulele," which is of obvious Hawaiian origin.

There is one other piece of evidence that, even if all of those so far mentioned are explained away, will clinch it.

At the bottom of the form, in block 23, the question reads: Is this document a forgery?

The "No" checkbox is clearly marked.

The most convincing evidence is in the document itself. There is no need for outside resources being used to check and compare signatures, dates, or anything else. It's clearly marked that the document is not a forgery.

What more proof do you need?

It is clear from the evidence that Barack J. Obama was born in Hawaii. This should put all that birther nonsense to rest.

Now maybe the president can go about doing the important things he needs to do.