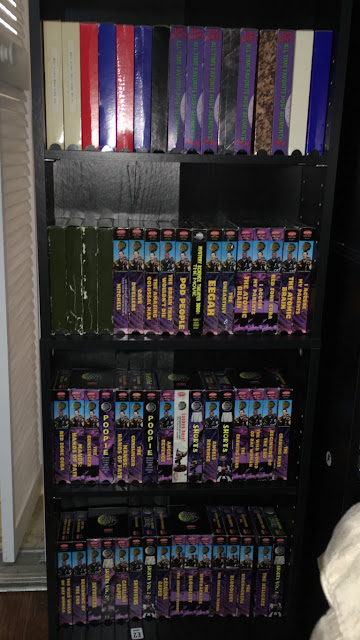 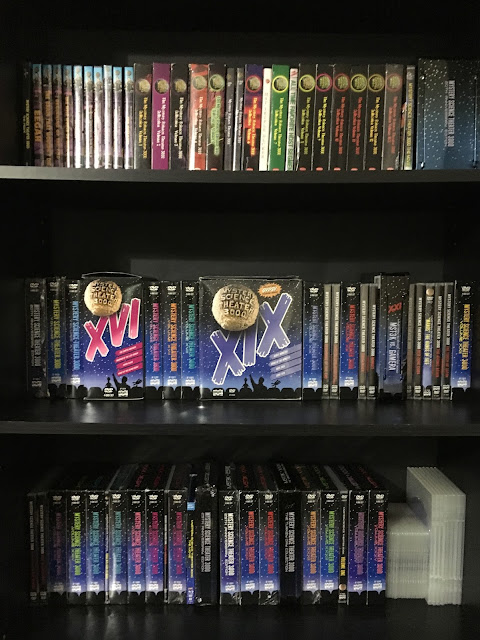 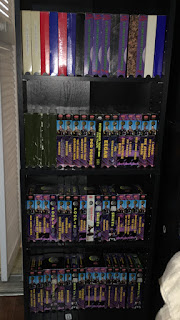 The first picture is the VHS collection. That book/tape case starts with these Best Brains VHS tapes:
Boggy Creek II on VHS was the last piece of the puzzle, by the way. I found it on eBay a couple of years ago, but was outbid. I dropped out before it passed $150. No, I'm not making that up. Recently, someone had a box of MST3K VHS tapes to sell, and it was one of the items in the collection. I paid under $100 for the two dozen tapes, but only really wanted that one. So, it took a couple of years, but I came out ahead. Kinda.

Oh, and you see the Poopie/Scrapbook thing? It was released as a two-pack, and as two singles. To be a complete collection, I had to find both releases. That took a while, but not as long as Boggy Creek II.

The next tapes are Rhino releases:
The Amazing Colossal Man is actually what started the whole VHS thing. That was the first release to be pulled over a loss of rights. It was never released on DVD, and the rights owner has not indicated any desire to let MST3K release it. I bought the VHS because that's the only legal format it was ever in commercially. Then I bought more. Until I got where I am now. 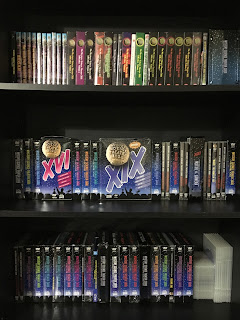 The next picture is the DVD case. Things didn't get any clearer when DVDs were released. The first DVD released was the feature film. Then, Rhino began releasing single episodes.
The DVD packs started next, often with four episodes per pack, with occasional exceptions.

The packaging of The Essentials' limited edition and standard release are identical. The only way to tell the difference is to open the package and look for the limited edition bonus disc.

The next four DVD releases alternated between Rhino and Best Brains. The Best Brains volumes were DVD repackages of related multiple volume VHS releases:
The last five volumes of the Rhino run came next, with the middle one having an interesting history.
The story of Volume 10 is interesting. Turns out Rhino didn't have the proper clearance for the Godzilla movie. The version they riffed was owned by a company that didn't have DVD rights, as I understand it, and when Volume 10 was released, Toho, who owns Godzilla, was none too pleased. Volume 10 was pulled. Of course, that meant Rhino was losing sales on the other three episodes. Finally, they decided to re-release Volume 10 with The Giant Gila Monster replacing Godzilla vs. Megalon and call it Volume 10.2.

This wasn't going to sit well with those that already bought the original Volume 10, of course. They'd have to shell out a four-pack price for a single episode, as they already owned the other three. So, they also released the single disc of The Giant Gila Monster that could be ordered separately. They even got the cast back together to film a skit blaming Frank for the mix-up, and showing how to "upgrade" your Volume 10. It's kinda funny and quite clever.

Of course, I have Volume 10, Volume 10.2, and the stand-alone "upgrade" disc. Because complete.

Shout! Factory (hereafter called Shout Factory, or Shout) took over the DVD releases in 2008, the 20th anniversary of the first episode of Mystery Science Theater 3000 on KTMA TV-23 in Minneapolis.
As Rhino volumes or solo releases went out of stock, Shout began releasing episodes for which they were able to secure rights. For example, Volume 9 went out of stock, and Shout released an episode from that collection as a stand-alone. Until recently, Shout wasn't able to get full rights to an entire Rhino volume, so they'd release singles, in order to make them available to fans, and to make money.
Shout obtained rights to all of the out-of-stock Rhino Volume 1. So, they rereleased Volume 1, with Volume 2 due later this year.
And that's what a complete video release catalog of Mystery Science Theater 3000 videos looks like.

Oh, those other discs? What are they you ask.

No, really. Go ahead and ask.

Well, since you asked. You may have noticed that not all the episodes have been released. And, you may know that there was a 21-episode season on local TV (KTMA at the time) before the show was picked up by cable. There are fan recordings of all of the episodes of MST3K, except the first three KTMA episodes. Those small DVD cases are the KTMA episodes.

Those larger DVD cases? Those are fan recordings of some of the unreleased episodes from The Comedy Channel/Comedy Central, and from The Sci-Fi Channel. All of episodes that aren't commercially released are available online. Well, except for the first three KTMA episodes.

The more reputable of the "Keep Circulating The Tapes" Websites only sell discs containing unreleased episodes. Some disreputable ones sell them all, but stay away from those. They will deny the rights owner their due royalties, and you really don't want to deal with people like that.

I bought some discs containing episodes that were only available as fan copies, but then bought the commercial release when that came out.

And there you go. That's the story of owning an entire Mystery Science Theater 3000 video catalog.