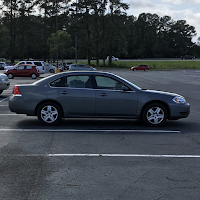 I bought the car new in late 2007, and took care of it as best I could. Serviced it on schedule, tried to be a responsible owner, and I feel pretty good about the miles I put on it. Lately, though, it's begun to have issues.

A year ago, it developed an oil leak, and the dealership did some $2400 worth of work on it. Well, whether or not it was actually worth that much for the work, I can't say. That's what they charged though. But, to keep the car running, I had the repairs done. Well, recently, the oil leak returned. Took it back to the dealer, and they wanted $1800 to fix it, with the work being rework of most of what was done a year ago. Which, to my ignorant mind, wasn't a good thing. I figured if the car took 150,000 miles to get the leak in the first place, it should have been a while before the same leaks reoccurred. Silly me.

There was also some damage to the vehicle over the years. About five years ago, some clown backed into me at a gas station in Peachtree City, GA. He had picked up a waitress from a nearby restaurant, stopped at the store next to the restaurant -- where I was gassing up Vlad -- then backed straight into the car. His insurance wanted to give me some crap, but they never were able to refute that my car was turned off and I was out of the car, fueling it when he backed into me.

Around a year ago, I had an incident on a stretch of highway near Baxley, GA around 4:30 one morning. Slightly foggy. 65 MPH stretch of road. Four lane divided highway. Two deer, one in each northbound lane. Hit the brakes, swerved to the left (I was already in the left lane) and did a 180 in the median. Lots of superficial damage to the bumper from all the growth in the median.

Then, a few weeks later, near Brunswick on that same US highway one night, a large dog, one of two running beside the road, decided he wanted to cross the road instead. I was in the right lane this time, and he met the bumper on the driver side.

I kinda feel I was lucky in both incidents. The deer thing could have gone horribly bad. So could the dog thing, if he had gone under the car, since he was a large dog and the Impala sits pretty low to the ground. I've been in a vehicle where that actually happened, and don't recommend that experience.

Apart from those incidents, I always enjoyed my time in the Impala. It was a comfortable car, and the best car I ever owned. But the fact it was needing major work every year meant it was about that time. That or the dealership does crappy work. Still, 178,000 miles.

A couple of weeks ago, I got a new car. Well, not a new new car, but a newer car. Didn't trade the Impala. They wouldn't have given me anything for a 2008 Impala with 178,000 miles on it and an oil leak. So, I kept Vlad and added Abe to the stable.

I turned Vlad over to my son to oversee selling it. I have all the receipts for services, repair work, tires, and turned all that over to him so he can show the history of the car, along with the details of the current issues. Maybe it'll sell. Maybe it won't.