I'm looking for advice regarding a first handgun. Yes, it's for me.

Now, I have actually owned a handgun in my life. A handgun. Owned a revolver. Left it with the ex-wife many years ago. She also had a handgun or two -- revolvers -- but she obtained them, I didn't. Except for that one that was left with her, as I mentioned.

Wife (number two) has several. Lots of revolvers, some shotguns, couple of rifles. She either bought them or inherited them. Anyway, she obtained them, not me.

I've never been much of a gun person. That is, never went to the range, never bought handguns (except for that one cheap revolver just to have for home protection). Only fired a handgun once, and that was, gosh, 40 years ago. It was a friend's and I really don't remember why.

Fired a rifle that my father owned. Little .22 that he kept for, oh, I don't know, birds, rattlesnakes, whatever. Only fired it a few times. And, that was well over 40 years ago.

Of course, in the Army, I fired some M16 rifles. Had an M16A1 issued to me briefly (nope, never fired it full auto), then M16A2 rifles for the rest of my time in service. I was an okay shot. Qualified as Sharpshooter but never as Expert. 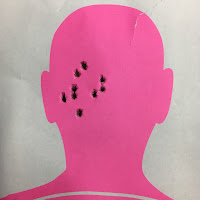 I've recently fired a few weapons at a local indoor range. I'm not a great shot, but I think I'm decent at close range (7 yards). I'd probably ruin some bad guy's day, or at least, make it not turn out quite as well as he had planned. I've had no handgun training, of course, but I know some weapons basics from the Army and apply those.

Anyway, never owned a lot of firearms. But, I'm wanting to have something for personal protection around the house ... and when out of the house. I'm on the road a lot every week, and I'd just feel better if there was some protection available when I'm in certain places. And, yes, I've applied for a Georgia Firearms Licence, which is required to carry in public outside of home or vehicle, whether concealed or open. Georgia is a "shall issue" state.

But, as you can tell, I'm no expert. So I'm curious as to what would be a good personal carry weapon. Should I go with a 9mm? .380? Something smaller for a first weapon? Or is larger better? Should I forego a semi-automatic and get a revolver?

Email ThisBlogThis!Share to TwitterShare to FacebookShare to Pinterest
Labels: Guns