Going to the movies 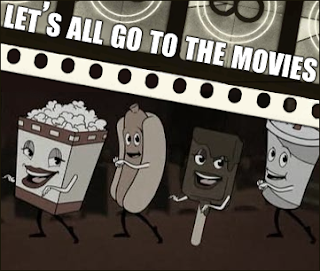 I've always liked going to the movies. When I was old enough, I would go whenever I could. That meant not working, being near enough to something showing that I wanted to see, and having enough money for me or me and a date. When I was younger, I didn't get to go to the movies all that much, but I enjoyed it when I did go.

After I was older, I managed to see movies in some cities and towns across southeast Georgia. It kinda depending on what was playing where, and where I happened to be at the time. Savannah, Brunswick, Baxley, Jesup, Hinesville, and other places that had theaters or drive-ins. Hinesville, Baxley, and Jesup had drive-ins at one time or another. Of those, I went to the one in Jesup the most, because they've had one the longest. They still have one. It's one of only five in the state, and the oldest in the state.

Years later, I went to movies in Jacksonville and Orange Park a lot. Those were my first experiences with theaters that had a lot of screens. I even got paid to go to the movies. I wrote about that a long time ago.

In the last few years, though, I've not been to the movies a lot because there aren't a lot of movies I want to go see. Most movies suck, and those that don't are hard to enjoy because the theater is crowded with jerks and the seats are small and everything's expensive, and ... well, you get the point.

This past week, I went to the movies. I mentioned going to the movies in Jesup earlier. Well, in addition to a drive-in, Jesup also has a standard theater. I remember going to the old Strand Theater years ago. Then it closed. I don't know if it was something I did, but it closed for a few years. It reopened years later as a twin cinema. I saw that there are new owners now, and its been completely remodeled.

I spoke to some people that had gone to see a movie there. They raved about it. I wasn't sure about that. I mean, how good could a theater be? Seats are small, it's crowded with jerks, stuff expensive ... you get the idea. But, I thought if there was ever something I wanted to see, I'd go see a movie at the Strand Cinema in Jesup.

Now, even though I don't care for those comic book movies, I did watch the first Deadpool movie and kinda liked it. So, when I found out Deadpool 2 was playing in Jesup, I decided to see it there. And I did.

I'm not just talking about the movie. Yeah, that was fun. But the theater experience was fantastic. The seats are roomy. They recline. There's a little table for food. Oh, did I mention the food? They serve food. Burgers. Fries. Hot dogs. Pizzas. Wraps. And they'll bring it to your table. Beverages? Yep. Cokes. Water. Slushies. Beer. Wine. Real food.

Oh, and it's not just the seats that are roomy. The aisles are too. Plenty of room. No one crawling over you to go pee. I've never had a more pleasant experience at a movie theater.

I'll go back to see a movie there. If something good plays, that is. But that's now my go-to place to see a movie. When I'm close enough.