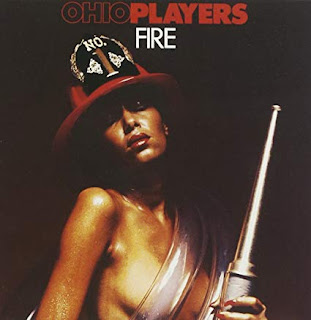 I sat there for a moment, not sure if I actually heard something. After several seconds, I decided I hadn't heard anything. Then I heard it again.

"Okay, that's the smoke alarm telling me the battery is low," I said to myself. Why did I say that to myself? I was the only one listening, that's why.

So, I walked to the hallway and looked over the guest bedroom door, where the smoke detector was.

It didn't really sound like it was coming from ahead and above me. Must be odd acoustics, huh? Oh, well. I need to take it down and change the battery. So, I walked over to it, twisted it slightly, and it came off. I then turned it over to locate the battery cover, expecting something about the size of a 9-volt battery. Nothing looked that size. There was something that looked like a battery cover, but it didn't look the right shape.

That sure didn't seem like it came from my hand. But, yes, I had the smoke alarm in my hand. Walking into the kitchen, where I keep the batteries in the drawer full of everything, I removed the cover and saw a couple of strange-shaped batteries. CR123A. Well, that's unexpected. I'll need to run to the store and get a couple. For now, I'll just remove them. So I did, setting the smoke alarm, batteries, and battery cover on the kitchen table.

Okay, that's unexpected. I had not expected the smoke alarm to continue to beep at me after the batteries were removed. Had I removed the wrong smoke detector? Did I have another I forgot about? So, I looked into the guest bedroom to see what I could find.

Okay, that was behind me. I looked up along the hallway, wondering if there was another. So, I stepped into my bedroom, looking up around the bedroom.

I unplugged the battery, and set it down on the kitchen table. I put he CR123A batteries back in the system smoke alarm and put it back on the wall. Or started to. I must have hit something because my alarm system went off. I walked over and punched in the code and it stopped.

Back to the hallway, and I successfully put the smoke alarm back up. I walked back to the home alarm system and set the alarm for the night. Rather than head to bed, I decided I was thirsty and got some cold water from the fridge. Sitting down in the recliner, I decided to finish the water before heading to bed.

A few minutes later, I heard a large vehicle pull up out front. Did I care enough to go see what it was? No. In a little bit, something caught the corner of my eye. There was a blue light I could just about see through the space between the window and the blinds. Now I cared enough.

Heading to the door, I peered between the blinds. Was that a fire truck? And a police car? And four persons standing across the street in the neighbor's yard?

No evidence of a fire. Perhaps someone had called 911 for a medical emergency? I grabbed my pistol -- you never know what might be going on at 10:30 at night -- and disabled the alarm. I walked to the front door, opened it, and there was a man walking up the steps. I flipped the porch light on, and I could see he was a firefighter.

"We got a report of a fire alarm at this address."

He was joined by two other firefighters and a police officer.

"Your alarm company said they couldn't reach you so they called us."

"I'm sorry about that. My phone hasn't rung," I said. And it hadn't. "Everything's okay here. I am sorry for the trouble though."

"It's not a problem." He turned to leave, then stopped. "You might want to your alarm company and correct your address." He explained that they gave him an address 1 number off, which would be on the other side of the street. That house, though, faces a different road, meaning the address they were given doesn't exist.

"I'll contact them right now. Sorry for the trouble."

Well, the alarm company does have my address correct in the Web interface, so I'm not sure why they'd give the wrong address. And while my phone didn't ring, I did have a voice mail from them.

Email ThisBlogThis!Share to TwitterShare to FacebookShare to Pinterest
Labels: life