Last week, Dr. Richard B. Hoover, an astrobiologist with NASA’s Marshall Space Flight Center, announced that there was evidence of alien life in meteorites.

According to his report at the Journal of Cosmology, life is common in the universe:


...these fossilized bacteria are not Earthly contaminants but are the fossilized remains of living organisms which lived in the parent bodies of these meteors, e.g. comets, moons, and other astral bodies. Coupled with a wealth of date published elsewhere and in previous editions of the Journal of Cosmology, and as presented in the edited text, "The Biological Big Bang", the implications are that life is everywhere, and that life on Earth may have come from other planets.

As evidence, he offered photos of what looked like life.


But the surprising news doesn't stop there, according to Dr. Hoover. "Building on this conclusion -- that is, if it looks like life, then it's probably life -- we now have proof that poodles live in the earth's sky."

While some scientists are skeptical of Dr. Hoover's latest claim, he offered additional photos to support his hypothesis. 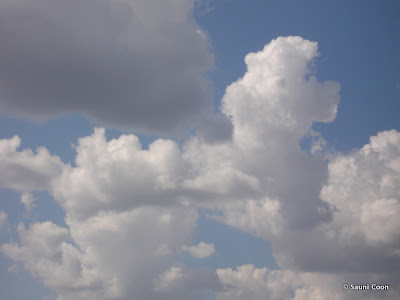 "You see this? There's no doubt that it's a poodle. But closer examination shows that it's floating in the sky with clouds," Dr. Hoover said. "It's obvious that giant floating poodles live on the earth. In fact, there may be additional giant floating dogs, not just poodles, that live in the sky."

While there is no photographic evidence of other airborne canines, Dr. Hoover suggests that other evidence points to their existence.

"The meteorites that contain microscopic slugs? How did they get to earth? I think that other sky-dogs may have seen the asteroids zipping by in space and, well, essentially played 'fetch' with them, bringing them to earth and dropping them on us," Dr. Hoover concluded.

The scientist stated that more research needed to be done. He said that once NASA learns more about the giant floating dogs, it is possible they could be trained to not only fetch, but to also deliver satellites into space.