That's some comic book thing, by the way. But, a lot of comic book people seem to hang around the internetz, so you may already know what I'm talking about. You kids with your Archie comics and your hula hoops and your fax machines...

Anyway, Marvel comics has announced that Thor is a woman now.


“The inscription on Thor's hammer reads ‘Whosoever holds this hammer, if HE be worthy, shall possess the power of Thor.’ Well it's time to update that inscription,” says Marvel editor Wil Moss. “The new Thor continues Marvel's proud tradition of strong female characters like Captain Marvel, Storm, Black Widow and more. And this new Thor isn't a temporary female substitute - she's now the one and only Thor, and she is worthy!”

I'm not sure how I feel about that. Partly, I don't care, because I don't read Marvel or any other comics. But, I do sorta care because it points out what's wrong with entertainment today: people don't have any ideas for story, so they use gimmicks.

I mean, there's no reason to give boobies to Thor and make the Norse god really irritable on certain days. Well, unless you can't come up with a good idea for a real story. Then, of course, making the god of thunder a chick keeps you from having to actually be creative. Plus, you get all the Hillary supporters on your side. After all, if Thor can be female, why not the president? They forget that Hillary would be less feminine than the current office-holder. And that's not a slap directed at Hillary.

Anyway, what are the ramifications of Thor having boobies? No, really. What are they? You see, I really don't read comics, so I have no idea what Thor the comic is all about. I did some research, but ran across things like alternate universes and the Negative Zone, and villains like Zarrko, Bloodaxe, Surfer, Thunderball and such.

Yeah. I'm not reading all that.

Anyway, Thor's got boobies. Did I mention that? Will this really work? And, if so, what's next? Batman and Robin as lesbians? Catwoman as a dude? 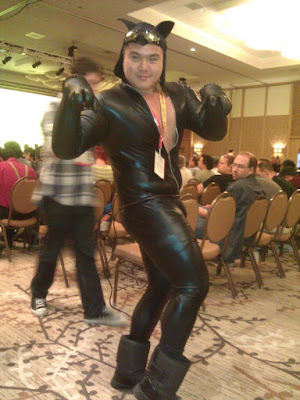