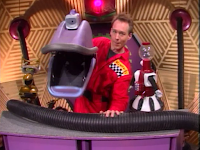 I wrote before about having a full library of all the video releases of Mystery Science Theater 3000. Shout Factory has continued to release volumes since I originally wrote that.

Volumes XXXVI, XXXVII, and XXXVIII have been released, as well as re-releases of Volumes 2, 3, 4, and 5. And, yes, I have them.

Volume XXXIX would normally be released this summer, based on the schedule Shout Factory has maintained since they took over the releases in late 2008. And they normally announce the next volume when a volume hits the stores.

This time, they didn't.

What they did do was announce that the complete Cinematic Titanic collection would be released in August. That's around the time of the normal MST3K summer volume release (traditionally, late July).

So, why no annoucement? Why Cinematic Titanic instead of a new collection of MST3K? I dunno. But I've never let that stop me.

In case you aren't aware, Cinematic Titanic was Joel Hodgson's project that, like Mystery Science Theater 3000, had a crew riffing on movies. Like RiffTrax -- from Mike Nelson, Kevin Murphy, and Bill Corbett, who were Mike, Tom and Professor Bobo, and Crow and Brain Guy on MST3K -- they pretty much were themselves in the riffing. Like MST3K, they used silhouettes over the movie.

Cinematic Titanic ran from 2007 to 2013 with DVDs and live shows. Since it's from MST3K creator Joel Hodgson and featured MST3K stars Trace Beaulieu (Dr. Forrester/Crow), Frank Conniff (TV's Frank), Mary Jo Pehl (Pearl Forrester), and J. Elvis Weinstein (Dr. Erhardt/Tom Servo), it's quite closely related to MST3K. And, it seems that Shout Factory is using the complete CT catalog to fill in for the summer release. At least, that's how I see it.

Anyway, we're not sure if we've reached the end of MST3K releases, or if we're simply close to the end.

As of this writing, there are only 13 national classic episodes that have never been released in any form (that is, Rhino VHS, Rhino DVD, or Shout DVD):
There's one other, The Amazing Colossal Man that has never been on DVD, but was released on VHS.

None of these are public domain, so rights have to be negotiated. Only two are likely for release: The Amazing Transparent Man and Quest of the Delta Knights (Source: Travis Hosey).

Shout Factory may never get rights to some of these. I'd personally be fine with them releasing any they could, with inclusion of previously-release solo items padding out to fill a four-pack. For example, Shorts Volume 3 was only on Rhino VHS and as a bonus disc on early issues of The Essentials (Rhino). That would be great to have for fans that didn't get those early or limited editions.

Some of the solo-only episodes would be great, too:
There are also some that were released on Rhino that have never been released on Shout Factory.
Technically, Santa Claus Conquers the Martians was never a solo release, but part of the aforementioned two-episode The Essentials DVD release along with Manos: The Hands of Fate and, for limited pre-orders, Shorts Volume 3.

I wouldn't mind Volume XXXIX consisting of packaging some of the solo-only releases. For example, a Super Essentials with Manos: The Hands of Fate, Santa Claus Conquers the Martians, Shorts Volume 3, and maybe the full versions of Poopie and Poopie II (their bloopers reels) as the fourth disc. The uncut versions of the two films would make great Bonus Disc materials. They'd even make good replacements for the interviews and features that have been staples of the releases.

Volume XL could be one (or two) of the unreleased items for which Shout Factory has or can get rights, padded with Tom Servo's All Time Favorite Host Segments volumes 1-5, The MST Scrapbook, and The Last Dance - Raw (though that would be great to pair with Diabolik, should it ever see the light of day.

Perhaps they could even work out a deal with RiffTrax for some of their public domain movies they riffed to be released.

Now, I firmly believe that if Shout Factory were to release anything other than four previously unreleased episodes, they'd get complaints. Heck, they've received complaints about some of the four-packs of unreleased materials. Some people live to bitch, moan, and complain.

Anyway, I'm not sure if we're on the home stretch, of if we've actually crossed the finish line.

Oh, and I've not even mentioned the KTMA episodes. Word is they exist. I've seen them, or tapes of broadcasts from episode 4 on. They're rough. They're not the quick-paced riffing we're used to, because it was all ad-libbed. Still, there are some gems there. But that's a topic for a whole 'nuther day.
By Basil at 5/30/2017 07:00:00 PM