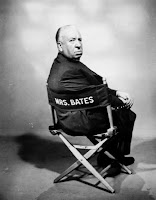 As I was looking over my movie collection, I noticed a few names of directors that, well, surprised me. Mostly, it had to do with how many, or how few, movies of any particular director I had in my movie library.

I had the most Buster Keaton movies, which really didn't surprise me, considering that I have some of his two-reelers. I have, as of this writing, 16 of his movies; that is, movies he actually directed. Of those 16, only two are feature-length films:
The others are shorts:
As for the director whose name is on the most of the movies I have, it really didn't surprise me that it's Alfred Hitchcock. What surprised me was that I only had 11 of his films:
I thought I had Lifeboat, but I don't. Same with The Wrong Man, The Trouble With Harry, Strangers On A Train, Notorious, and others. I've seen them, but didn't realize I didn't own them. I don't have as many Hitchcock films as I want.

I have nine movies by William Wyler and Steven Spielberg. I never would have picked those off the top of my head as being directors of who made up that many of my film library. I sort of have nine by Ridley Scott, but that number included two versions of Blade Runner and two version of Alien. So, I actually have seven of his. I also have seven by Martin Scorsese and seven by Billy Wilder. Again, I never would have thought that, until I actually sorted by director and discovered that.

What probably surprised me most was that I only have one film by Akira Kurosawa: The Hidden Fortress. Which means I don't have Seven Samurai. Or Yojimbo. Or Rashomon. Or... well, you get the idea.

I had no idea I liked William Wyler that much. Looking at the actual films, most of them aren't films I'll watch again and again. Same with Spielberg's films.

Of course, that's probably true of most of the movies I own. Which makes me wonder why I even own them.