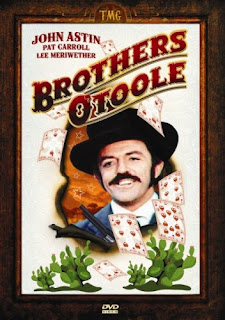 Harvey from Bad Example and IMAO asked me a question the other day.


Just wondering if you're familiar with this movie?

I'm only marginally familiar with 70's western comedies anyway, but I've never heard of this one. You?

I'd never heard of the movie, so I looked it up. I was intrigued by the cast:

Now, I'm perfectly aware that a good cast doesn't always mean a good movie. But, hey, it might be a gem. So, I started looking for it.

Nuthin'. Nuthin' at all.

Oh, there were pages about the movie, but no way to watch it. At first. Finally, Amazon had it available for streaming and on DVD. And, the DVD was on sale, for cheaper than a streaming rental at the time, so I bought the DVD. It came in last week, I ripped it out for iTunes and watched it.

Eh. It was okay. It was no Blazing Saddles. It wasn't even Support Your Local Sheriff, but nice enough with moderate humor.

The first hour a case of mistaken identity of a con man for a wanted felon, and easy mistake as John Astin played both characters. The last half-hour was the con men brothers trying to run a scam.

Not a great film, but nice enough. It's a heckuva lot better than some movies that I paid more for. So I'm happy to add it to my library.

Oh, and why did Harvey ask me about it? Well, he knows I like movies and that I might just have known about that one. I didn't know about it, but now I do.