The Little Princess called earlier this week. She was having problems with her computer.

She was having trouble getting on the Internet using her computer's wireless connection.

Now, when she got her computer recently -- it was a replacement Dell sent for one that went bad -- she sat on the couch at the house and got on the Internet. So, I figured the wireless connection worked. But she said it didn't work for her at her apartment, in downtown Athens, or on campus (UGA).

So, Saturday morning, I got up and drove to Athens.

And, sure enough, her wireless wouldn't work. That is, it didn't show a usable signal. It showed some stuff ... likely open networks that others were running ... but not the connection she was expecting.

We then piled into the car and went downtown. Stopped at a hippie joint called "The Hot Spot" and got on their hot spot. 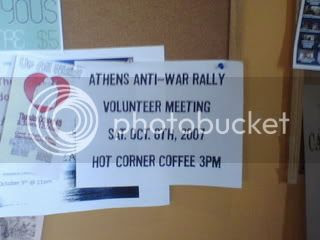 How did I know it was a hippie joint? Well, the "anti-war" rally sign about the meeting at that place was the first hint.

The other was that it was crawling with hippies. And they sold Coca-Cola in a 12 oz. can for $1.25 plus tax.

I was, by far, the oldest person in the place. And likely the only one who ever had a real job.

Well, there was the girl running the register and playing on the computer that was also the register. Only I'm not sure she's had a real job, either. I mean, if you sell Cokes for $1.25, that's not a job. It's robbery.

Anyway, the MacBook and my Dell notebook was able to get on the wireless network there. But the Little Princess' Dell notebook wasn't picking up the Hot Spot's hot spot signal. While we were sitting in the place.

So, I decided to contact Dell. I went to Dell.com on my MacBook and found their support site. They wanted the "Service Tag" of her notebook. Which I didn't have.

Then, on the wall, there was suddenly a network jack.

Okay, it was there the whole time, but I didn't notice it.

So, I plugged her notebook in, and it was suddenly online. But not via the wireless.

But, I was able to log on to Dell.com on her computer and have it scan for the Service Tag.

And now, here's the thing. After the scan, her wireless setup found the Hot Spot!

Which, as best as I can figure, means that an online scan of the computer fixed the thing that was keeping it from finding a connection to go online.

Which you have to think about for a minute.

Yeah, it made my brain hurt.

We finished up there -- got all her latest downloads, updates, and such -- then went on campus.

Sure enough, she had no trouble getting online via the wireless.

Then, back to the apartment.

And there was the problem. Sort of.

Sometimes she was able to get the signal, and sometimes not. Although the MacBook ... and my Dell ... had no problems.

But, it eventually picked up the signal, so all was well.

Got her Windows One Care -- Microsoft's new security suite that integrates with Windows XP and Vista -- to replace her separate apps. Ease of use is the goal.

Took all day for things to happen. Partly because we didn't rush anything. And partly because we made a couple of trips to the store ... and to eat. More about the restaurant later.