In December, I began the task of watching all of the Mystery Science Theater 3000 episodes. More about that can be found here and here.

In December, I covered the KTMA season (Season Zero), in which the format developed into something quite recognizable ... and quite good. Now, as the new year is underway, so is the new season of MST3K. At least, insofar as the whole "watch them all" project.

Episode 102: The Robot vs the Aztec Mummy

So, why am I starting with Episode 102 instead of Episode 101? Because Episode 102 aired first. While records from that time aren't all that great, here's the proof:

A good source for MST3K trivia and dates and stuff is MST3K Temple. There are actually lots of MST3K Websites out there. People with even more free time than I have.

The Comedy Channel, by the way, was one of two comedy channels that premiered in 1989. The other was HA! (complete with the exclamation point as part of the name). They merged a couple of years later and became Comedy Central.

The show has a new opening. The lyrics were changed to reflect the updated nature of the premise: that Joel had been shot into space so they could study the effects of bad movies on the human brain. 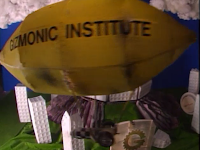 In the not-too-distant future, next Sunday A.D.
There was a guy named Joel, not too different from you or me.
He worked at Gizmonic Institute, just another face in a red jumpsuit.
He did a good job cleaning up the place, but his bosses didn't like him so they shot him into space.

We'll send him cheesy movies, the worst we can find (la-la-la).
He'll have to sit and watch them all, and we'll monitor his mind (la-la-la).
Now keep in mind Joel can't control where the movies begin or end (la-la-la)
Because he used those special parts to make his robot friends.

If you're wondering how he eats and breathes and other science facts (la la la),
Then repeat to yourself, "It's just a show, I should really just relax
For Mystery Science Theater 3000!"

Dr. Forrester is wearing the familiar green suit, green glasses, and wild hair. Dr. Erhardt looks a bit more mature than the KTMA season (just a few months earlier). He's still babyfaced, but something about the character is different. Maybe he lost weight.

At the end of the invention exchange, we heard the Mads use their "Thank you!" catchphrase. I don't recall them saying that in the KTMA season, but I may have missed it.

Though the opening lyrics mention Gizmonic Institute, and Dr. Forrester's suit jacket has a Gizmonics Institute logo, Dr. Forrester refers to their location as "Deep 13." There's no explanation for that, though it may have occurred in Episode 101 (which aired second; we drove that point into the ground earlier). I need to pay close attention for that.

The opening segment (the Invention Exchange) concluded with a slapstick gag that looked like it had to hurt. Oh, and Joel didn't have any buttons to press when he yelled "Movie Sign!" I wonder if they weren't built yet. The whole set redesign must have taken some time to complete.

The redesign included a new hallway sequence, the one we're all familiar with. Or nearly so. I think there was a change when Joel left in Season Five. We'll look for that when the time comes.

The movie didn't start right off. They had a short: an episode of the Republic Pictures serial Radar Men from the Moon. They also had a long explanation of what a serial was.

Seeing Clayton Moore (he played the henchman Graber in the short) without his Lone Ranger mask was odd. I don't recall seeing him in anything else without his mask or a similar disguise.

After referring to Tom Servo as "Servo" the whole KTMA season, Joel calls him simply "Tom" early in this episode.

There were two gags the crew pulled that were not standard riffs. Early in the movie, Joel puts his hand over the singer's mouth several times, and the sound muffled each time. I first thought this was a flaw in the sound of the film that Joel turned into a joke. But, according to Michael J. Nelson (in the Amazing Colossal Episode Guide) this was not so; they messed with the movie's sound to create the joke. And, about half-way through the episode, when the characters are all standing with their backs to the camera, the peeing sound was added, allowing them to tell pee jokes. Again, the kind of thing they wouldn't do later in the series.

They did the whole "Lassie" routine ("What is it fella? I think he's trying to tell us something. Dad? He's trapped? Under a rock? Down in Dead Rock Canyon?") when the leader of the Devil Dogs arrived at the door.

One major change involved Tom Servo. He got a major redesign. He's now the familiar red, rather than the KTMA silver Servo. Same voice (Josh Weinstein still has that role), just an improved look.

In fact, all the robots got a redesign to some degree. We'll cover the others later, as well as some of the other changes to the switch from KTMA to The Comedy Channel.

The movie itself was hard to watch, but not impossible. It's not the worst movie MST3K has done, but darn close. The riffing of the short was much funnier than the riffing of the movie. That said, the movie had some fun parts. Just, compared to the short, the movie fell ... um ... short.