I've decided to take on the task of watching all of the Mystery Science Theater 3000. More about that here and here.

Okay, what's the name of the movie in this episode? Is it Project Moon Base or Project Moonbase?

Everything I can find about the movie calls it Project Moonbase. Except the title as shown in the actual movie. That reads Project Moon Base. So, I'm take the attitude that the movie knows it's actual name. Though this movie is so wrong about so many other things that it could be wrong about that, too. Everybody else seems to think so.

The tinting of the black & white shorts and films continues. Perhaps this is the way things will be from here on out. That would mean most of the b&w episodes I've seen were tinted, and I never noticed it until I started watching the episodes in order, and the first several weren't tinted.

Joel & the Bots are getting tired of the Commando Cody shorts. I'm enjoying them. In riffed form, that is. I don't know how I could deal with it if not for the riffing.

The movie, though, is truly bad. Some aspects are okay, but not many. Okay, there's nothing good about the movie. Except the hot Japanese she-villain. Only she's not Japanese. Or a villain. But, apart from that...

The lead character, played by Donna Martell, was named ... get this ... Colonel Breiteis. As in "Bright Eyes." And, no, I am not making this up.

At least they didn't name her Colonel Nicetush.

Yes, they made fun of her a lot because of her looks. Joel and the Bots did, too.

Despite how bad the movie was, the riffing was top-notch. Crow was great. Servo was fantastic. Joel was wonderful. The skits were good. Well, two out of three were. The lame one wasn't really lame, just not as good as the other two.

This was a bad movie and a good episode of MST3K.

The other day, I mentioned how mercilessly J&tB ragged on Alan Hale, Jr. in Episode 106 - The Crawling Hand. I thought they crossed the line beyond good-natured ribbing and being just plain mean. I also mentioned that Hale died 17 days after that episode first aired.

Joel & the Bots remembered, and dedicated the episode to him. Perhaps my criticism was a little harsh. 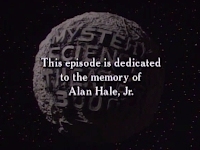