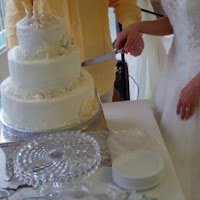 Son, you're now married. Whether you realize it or not, your world has changed.

Yes, this is the dreaded "Dad's giving me advice and I didn't ask for any" situation that arises ... well, all the time. It's kinda what I do.

Now, why would someone with my marriage track record be someone you'd listen to? Maybe I'm not someone you need to listen to. Then, again, maybe I am. Hear me out and decide.

Now, about the wedding. It was beautiful. Yes, the rain kinda made things wet and sloppy and just plain rotten at times, but that was nothing but stuff around the wedding. The wedding itself was beautiful. Your vows to each other brought tears to my eyes. Everybody was looking at the two of you, so I got away with it.

Remember when it was all stressing you out, and in the elevator, when it was just you and me, I said to let those that are wanting to do their stuff do their stuff? I wasn't telling you anything you didn't already know; you were already doing that. But, I said it anyway, to reinforce what you were doing. You were doing the right thing for the circumstances, and I wanted you to know that.

See? You already know what to do. You're a grown man. Now, you're a grown married man. I'll be offering advice, but, like the "let 'em do their stuff" advice, it'll often be things you already know. When I do that, I'm trying to reinforce what you know. I can't teach you much anything new, except by example, and then, it's often examples of what not to do.

Kinda like, "Huh. Look what Dad did. Look where it got him. I need to not do that." So, yeah, I can be of some use, even if it's an example of what not to do.

But, I also have some good advice on things to do. Like what I mentioned earlier: go read 1 Corinthians 13.