Maybe I'm just a humorless jerk, but I didn't find this funny:

You see, the lefties had started a Twitter hashtag #SarahPalinFilms trashing the former governor and GOP vice presidential nominee. Netflix saw fit to join in the Sarah-bashing.

Then, when asked about it, lied. So that's two strikes. But, the first is enough for me.

Now, had they done such a thing with Barack Obama also, then there'd be the chance that Netflix was ragging on both sides of the political spectrum. But, no. They only poke fun at the right. So, this right wing nutcase isn't sharing any more of his money with Netflix. After all these years, I've canceled my Netflix account: 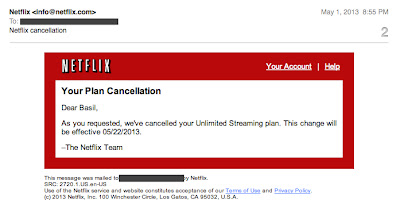 I'll be able to find enough to watch without them. It's a shame, though. I've been a customer a long time.