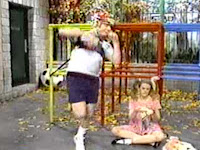 Was doing laundry Sunday. Of course, that meant a trip to the laundromat, which meant ... Laundromat People.

Now, I fully realize that I'm now one of the Laundromat People, but that just makes me more qualified than others to comment on them.

Let me set the stage. The TV is on De Pelicula, and it's showing a movie featuring masked Mexican wrestlers, girls in short shorts, and double-south-of-the-border rejects from The Final Sacrifice

Then, there's the the kid on a leash running around. Little girl, three years old maybe, that was there with two women (possibly a mother and grandmother, but not sure). This isn't a debate about putting kids on a leash. I'll let Erick Erickson deal with that. No, I want to use the kid to make a point.

Now, if you weren't paying attention, let me say the key part of this again: there's a kid on a leash running around.

Think about that. If she's on a leash, how is she running around? No, she's not dragging the leash behind her. There's a hand firmly attached to the leash.

No, she's not leading the mother around. She's carrying her own leash.

And that's the problem with the government. We know it needs a leash, but we let it carry its own leash. And, it runs wild.

So, what do we do about it? The government, I mean. Do we grab the leash and hope it doesn't bite us? (Think: IRS.)

Do we try to cage it?

Email ThisBlogThis!Share to TwitterShare to FacebookShare to Pinterest
Labels: government