I've never been a particular fan of Truman Capote. I've read some of his stuff, and yes, he was a very good writer. He could put words to paper in a way that few others, if any, could. But, I wouldn't say I was a fan. I certainly didn't dislike his writing. Of course, the fact that he didn't publish much in my lifetime contributed to this.

When I thought of Truman Capote, I thought of the character I saw on TV, on The Tonight Show and other talk shows. An odd little man with a funny voice but with interesting words.

I remember reading In Cold Blood years ago. It was a fascinating read. Not an easy read, but it was a book that you wanted to keep reading. Capote knew how to put words to paper.

The movie was very good, too. It's not a movie I like to put on and watch very often. In fact, I've seen it twice. Once, a long time ago, and more recently, within the last week or so. I had some downtime wanted to watch a movie. I launched my streaming device, and without looking, started scanning through with the remote. It stopped on In Cold Blood.

"Well, there's the feel-good movie of the year," I thought. But, I pressed Play and started watching. That got me to thinking about that horrific crime and wondering just how true the movie was. Which led me to wonder how true the book was.

Okay, right to it: the book was mostly true. I think Capote filled in some blanks from what he thought was the truth, as best he understood it. As for the movie, it was a fairly faithful adaptation of the book.

The movie was nominated for four Academy Awards -- Director, Adapted Screenplay, Cinematography, Music -- but didn't win any. The American Film Institute ranked it was one of the top ten courtroom dramas. Which is how it ended up in my library.

While looking into the Clutter murders, I picked up bits and pieces about the case, including finding a copy of the Perry Smith case file. That was an interesting find. Anyway, I ended up later watching the movie Capote.

The movie was good. I enjoyed it. Philip Seymour Hoffman won an Oscar for his performance. But, the whole thing was the relationship between Capote and the killer Smith. And, as much as I liked the movie, I don't like it when "true" movies stretch the truth.

In the movie, Capote visited Smith a lot in prison. But in reality, he didn't. They wrote a lot, but Capote only visited Smith three times. 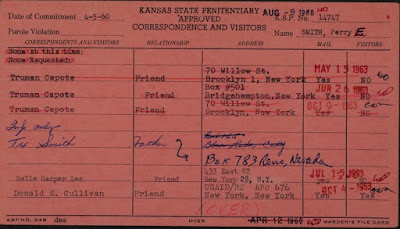 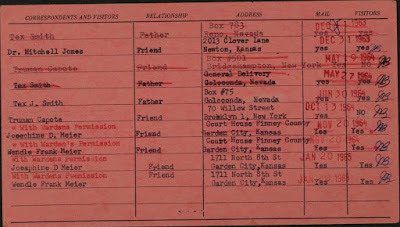 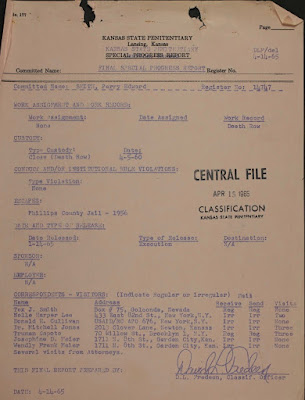 Capote was there for the execution, though. However, the movie had investigator Alvin Dewey there, and included a scene where Smith thanked Dewey for being there. However, Dewey's name isn't on the list of official witnesses. Capote's was. 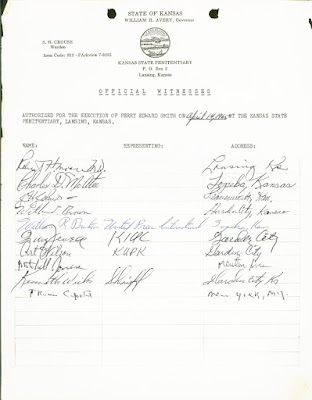 Another variance from the truth, more disturbing in my mind, was the method in which the writer's decided to get around this fact: Capote bribing the warden to get access.

It is true that Capote did ask for access, but he didn't do it in person, but rather by letter. 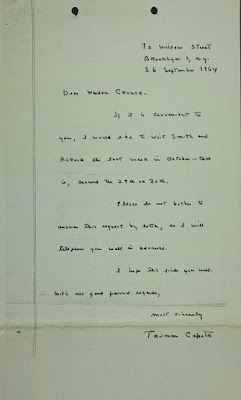 Capote was turned down, by letter. 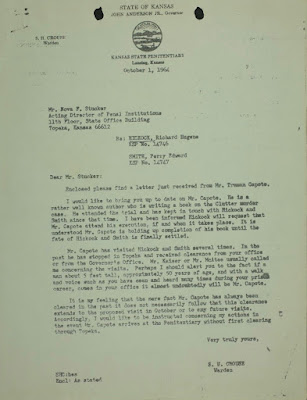 The idea that what Capote did to get the information from Smith to complete his research into the book was not, in the mind of the writers, good enough, but they had to stretch one bit of truth, then another to make the first stretching happen.

Little things like that bother me when a movie is supposed to be a true story. Of course, I understand little things may be necessary, but these aren't little things. Despite this, I did enjoy the movie. I just with they enjoyed the facts more.
By Basil at 12/29/2018 06:00:00 AM