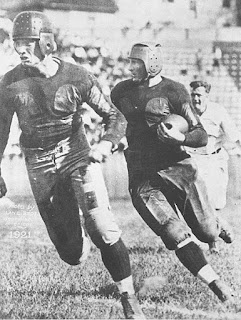 I do this every year, and I'm doing it again this year. I'm telling you what the NCAA FBS Subdivision (what I still call Division 1-A) playoffs would look like if they did it right.

All 10 conference champions should be in a playoff. They won their conference, and that should mean something. A place in the tournament is a suitable reward for accomplishing that goal

Keeping in mind that limiting it to the conference champions leaves out some really good teams that are better than half of those conference titleholders. So, add the six best teams, as determined by a committee -- just like the CFP is done today -- to the tournament. Have #1 host #16, #2 host #15, and so on. Losers in the first round still get an opportunity to go to a bowl game.

The winners would advance to the next round, with the highest surviving seed hosting the lowest surviving seed, and so on. That leaves four teams left, and those teams would meet up New Year's, just like the CFP does today. The difference is, the final four got there by winning a playoff game, not solely by a committee vote.

Some won't like putting NIU and UAB above Michigan, but they won their conference. Besides, putting all ten conference champs higher will make for some better games. I mean, which is a better game: Alabama playing NIU or Penn State? App State playing Clemson or UAB?

Here are the seedings, listing the teams, the conference championship if applicable, record, and CPF ranking (or other as noted):


This gets everybody that can make a case for being included a chance to prove it. Whoever wins out from that pool of teams is worthy of being called national champions.