My daughter called last night. The Little Princess was asking about the Wife and me driving over to Athens today. Seems there's a football game gong on. UGA is taking on Troy. Should be a blowout. But you never know.

Anyway, I could make the trip. But the Wife couldn't. Oldest granddaughter has her 8th birthday tomorrow, and the Wife is doing the cake. So, she needed to stay at home and get all that together.

So, I drove over alone.

I haven't been to a lot of Georgia football games. Was at the 1980 game where Lindsay Scott caught the touchdown pass to beat Florida. The Sugar Bowl in New Orleans that following January, where they won the national championship. Was also at the "1st and 99" Georgia-Florida game a couple of years later. And, I think, one other UGA game.

And never at a game in Athens.

So, this morning, I wasn't sure what I'd run into in way of traffic.

Turns out, it wasn't all that bad. Left the house just before 7:00 and got to Athens around 10:00. And, by 10:30, had parked at some coffee house, put money in the meter, hit the ATM, ordered a cinnamon roll and a Coke, pulled out the trusty MacBook, and was blogging just after 10:30.

So, traffic wasn't all that bad.

Except one small stretch of road.

Now, if you're not familiar with GA-316, it's a large highway. Divided by a median. Sort of like an interstate highway, but it does have the occasional traffic lights.

Right-hand lane sometimes has a turn lane. Left lane always does. So, it follows that there'd be less traffic issues in the left lane. But the left lane was moving slow.

Speed limit was 65, and we were moving between 50 and 55, depending on how close or stretched out traffic got.

But the right lane was moving right along.

Knowing it shouldn't be that way, I figured whatever it was would clear up and I'd be fine, so I might as well stay in the left lane.

Then, my patience ran out.

So, an opening was there ... a long stretch, actually ... and I moved into the right lane.

I sped up to 65 and was moving much faster than the left lane.

Then, I found out why.

Pick the one of these that you think it was:
If you picked "C" then you're a winner.

Anyway, once I got past her, traffic was fine. Other than actually in downtown Athens.

I was surprised how well it went. Of course, the fact that almost everyone was going to the game ... or a game-related event ... in Athens may have worked in my favor. 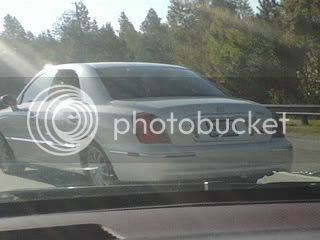 One Auburn fan must have thought the traffic was really bad, and decided to get a one-week head start. Or they can't read a calendar. I'm not sure which.

Anyway, until downtown Athens, the traffic was pretty good. Encountered one intersection where some idiot pulled out and had all four paths of traffic blocked for a little bit.

But, the trip wasn't a bad trip after all. And the game's in a couple of hours. So, I got to go get ready for that.