For example, I used to eat grits with salt (just a touch) and butter. Now, I eat them plain.

Circumstances caused the change in my taste. Plain grits was all I had at one time, and I got used to eating grits that way.

But, other things cause changes, too.

In Korea, they ran out of Coke one time.

We could go to the PX, or one of the AAFES stores, and buy Cokes. But they also had little stands set up where we could get snacks. Including Coca-Cola.

Only, they ran out.

PX, AAFES outlets, snack bars -- all of them were out of Coke. And they didn't know when they'd get any more.

Ajussi said, "We have Pepsi."

"Doct Pepper, then?" he asked.

And I learned to drink Dr Pepper. Because, for several weeks, there were no Cokes at Camp Hovey. Or Camp Casey (just a short PT run away).

Now, I can drink Dr Pepper. I used to couldn't drink the stuff. But I can now. Diet Dr Pepper, too.

I've always liked RC Cola, but was never too big a fan of diet drinks.

Tab (which I can now drink) used to taste awful. Diet Rite, too. And Diet Pepsi. As well as Diet Coke.

Only, I outgrew it.

Really. I was skinny. Wormy-looking.

And, I've been fed diet drinks. The Ex- used to buy Diet Dr Pepper, which, when I got back from Korea -- and found out about the upcoming divorce -- I was able to drink.

I'm used to the taste of diet drinks now.

Even when I'm not dieting.

And, that causes some odd sights.

We were in K-Mart, and they had drinks on sale. Diet Rite.

So, the Wife picked up 4 cases of Diet Rite.

Not so much 'cause it's a lo-cal drink, but because of the taste.

Oh, remember I said we weren't on a diet? 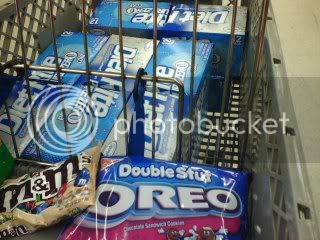 That explains the M&Ms and Double Stuff Oreos in the shopping cart.

Yes, I realize just how silly it is.

But, gosh, I think they taste good.

Not just the M&Ms.

Not just the Double Stuff Oreos.

But the Diet Rite Cola.

I know I can't be the only whose shopping cart has such mis-matched items.