All I want for Christmas is... 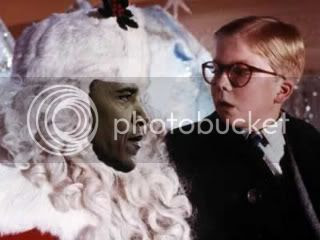 Remember the movie A Christmas Story? The main character, Ralphie, wanted "an official Red Ryder carbine-action 200-shot range model air rifle with a compass in the stock, and this thing which tells time."

And, at the end of the movie, he got it.

Well, so do most Americans, it seems. They voted him as the next president.