Now, you ought to realize that, at my current location, my options are limited. I can get Internet service from AT&T or from the local cable company. And that's it. No other broadband options are available.

I used to have service from the cable company. And, every weekend, they'd have an outage. And I'd pick up my BellSouth (now AT&T) phone and call the cable company, playing answering service roulette, hoping to reach someone that would be able to get the Internet service back up.

Then, I realized that I could just get BellSouth DSL service that was as fast (faster, as it turned out) and cost less. So, the switch was made.

For a while, things were great. However, after upgrading to a faster service (from 3 Meg to 6 Meg) they provided a new modem. Some little silver-looking POS about the size of a billfold wallet. It breaks down from time to time. I'm on the third one.

For the last several months, Internet service has experienced the occasional interruption. But short interruptions, lasting maybe a minute, perhaps less. Sometimes it happens multiple times a night. Sometimes I don't experience any outage. Now, it could be that it goes down and back up before I realize it. If I'm not streaming a YouTube or Netflix video or something, then I only would notice it when I click a link or a page refreshes. So, I don't really know how many brief outages there have been.

Lately, though, the outages have been longer and more frequent. Within the last month -- and twice within the last week -- there were outages that lasted several hours. When I called about them (using my Verizon cell phone; it works), I got a message (either prerecorded or from the live CSR) that there was a wide-spread outage in my area that was expected to be back up by a certain time.

The last of these outages lasted over a day, and ran from some time on the 4th (I was at work at the time, but indications are it went down early that afternoon), and it wouldn't be back up until the afternoon of the 5th.

Then, I got the first "new" email -- that is, not dated from the previous day or earlier that day -- after the Internet came back online.

It was from AT&T. It began

A new AT&T bill for your account number ending in **** is ready. 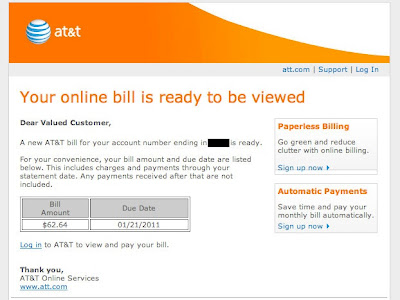