What is it on Mars?

There is an amateur astronomer that says he found something man-made (or alien-made) on Mars.

He found it using Google Earth.

I know what you're thinking: "That Sarah Palin sure is hot!" Well, you'd be right. But you're also thinking, "But you said 'on Mars' and he used Google Earth and that just doesn't add up!"

Well, it turns out that Google Earth has not only maps of Earth, but also the Moon and Mars. And they still call it "Google Earth." Racists.

Anyway, if you have Google Earth, you can see the "structure," too: 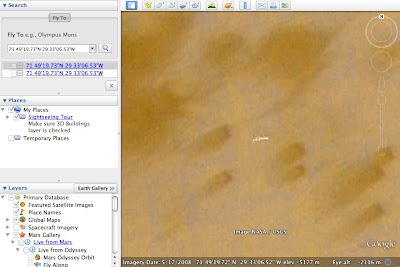 The astronomer, David Martines, says it's a building or something. But the director of the Planetary Imaging Research Laboratory, Alfred McEwen, says it's a cosmic ray.

We spoke with Cosmic Ray, and he said it wasn't him.

Here are some possibilities:
We can't say with certitude what it is. Something mysterious, we know that much.

What do you think it is?