I'm watching all of the Mystery Science Theater 3000 episodes in order. More about that can be found here and here.

Episode 323: The Castle of Fu Manchu 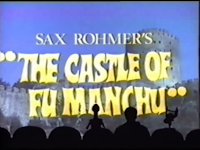 My copy is a fan copy. It was recorded during the midnight 31 August/1 September 1994 airing on Comedy Central, based on a promo for an upcoming episode. The new 4-show multi-pack, Volume 23, will be released in 13 days. I've already purchased my copy, and am simply awaiting its official release and delivery.

I'm not sure I'd enjoy it any more, though. The movie is a mess. Yes, it has a plot, but the scenes seem to have little bearing on anything else.

In the opening, after a confusing mess involving scenes from a black & white movie spliced in with color scenes from this movie, Crow mentioned that he didn't know what was going on. And it was like that the whole time.
Let me 'plain. No, there is too much. Let me sum up.

It's the 1920s and Christopher Lee is Fu Manchu, who sinks the Titantic or something, by firing an ice ray at the water. The weapon -- or maybe there's another weapon, I'm not sure, but Fu Manchu sure loves his super weapons -- that can do something else if some guy in a hospital bed can do something to it. Or something. Anyway, there's opium needed -- perhaps to make the plot tolerable -- so they storm a compound, kill the guy in charge, then double-cross the people who helped them. Or something. To get a doctor to give the sick guy a heart, Fu Manchu causes a dam to break in another movie. Then it got really hard to follow. There are lots of fez-wearing people. There's a rescue attempt. People die. The castle crumbles. Fu Manchu warns that he will be back -- only, there were no more Fu Manchu movies, unless you count the Peter Sellers spoof from 1980 (and you shouldn't). The end.

Christopher Lee played Fu Manchu. Tsai Chin -- you've seen her in a couple of James Bond movies, one with Sean Connery, one with Daniel Craig -- played Lin Tang, Fu Manchu's daughter. So, the problem wasn't necessarily the acting as it was everything else. Not a good movie.

The riffing was good. Maybe it was great, but the movie was so bad that it only seemed good. And that's the odd thing about MST3K. Sometimes, the best episodes involve the worst movies. Sometimes, though, really bad movies seem to make for really bad episodes.

Perhaps all it means is my mood on one day allowed me to enjoy an episode, but, had I watched it on a different day, when my mood might not have been so cheerful, I might have hated the show.

Maybe this show was a hard one for the Best Brains crew. They did a Host Segment that focused on how hard it is to riff a show. The Mads failed miserably -- they sounded like me trying to riff a show -- and were funny as they made a point.

Anyway, this one wasn't to the level of making me want to stab hot pokers into my ears and eyes, but neither was it one to make me want to share with all my friends. It was an okay episode with some good moments.