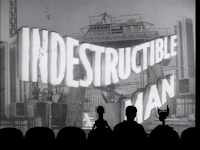 , there's no "The" there. So, properly, it's like he's some super hero or something. Indestructible Man!

Here's the plot: Lon Chaney, Jr. is a robber and killer who was double-crossed by his accomplices. He goes to the electric chair, but a mad scientist accidentally brings him back to life and makes him ... indestructible! Then the killer goes around exacting vengeance on those that testified against him. At the end, it turns out he's not so indestructible after all, and dies. Again. The end.
The movie wasn't the only thing in this episode, though. We got to see Chapter 2 of Undersea Kingdom, starring Crash Corrigan. We won't get to see any more of this Republic serial, though. Not that I'm complaining.

The short is just kinda there. Not much happened in this chapter, and the riffing was ... eh.

The movie, though, was much better. The riffing. Not the movie.

Not that the movie was bad. I mean, a convicted killer brought back to life and who goes around killing everybody. Sounds like ... a bad movie starring Lon Chaney, Jr.

Of course, it's unfair to pick on Lon Chaney, Jr. He was a good actor. Not a great actor, but good. While he's best known as The Wolf Man

This movie? It didn't do much for his career. But it did do something for my funny bone. Good riffing. Good Host Segments. And, we got to see the appearance of Mike and Kevin as cops, telling the Mads to hold it down and to stop disturbing the neighbors. Oh, and J&tB promised no more cop-donut jokes.

The didn't promise no more funny. So I'm expecting more funny in the next episode.