Imagine you were voted most handsome in high school, then after graduation got a job as a sportwriter, then served in the miltary, then got a job working in movies. And then, one day, they came to you with a role written especially for you.

How would you feel? Pretty good, huh?

Suppose it was the title character in a movie called

The Brute Man? Not so good after all, huh?

That's what happened to Rondo Hatton. He suffered severe symptoms from acromegaly, and died from complications of the disease 8 months before

When you see the brute in this film, it's what the actor actually looked like. It wasn't a make-up job, like Lon Chaney or Charles Laughton had in some of their films.

Now, is the fact that this is an exploitation movie the thing that makes this a bad film? No, but you can throw that into the mix.

This movie would be bad if Rondo Hatton's appearance had been the result of make-up, not disease.

What's it all about? I'm glad you asked.

Hal is a jerk, but his best friend Cliff is a jerk, too, and they both have the hots for Virginia, so Cliff the Jerk helps Hal the Jerk cheat on a test, but cheats the cheat by giving him the wrong answers, so he has to stay after school, then when Cliff the Jerk rubs it in on Hal the Jerk, Hal the Jerk messes up an experiment and gets all disfigured and such, so Hal the Jerk becomes Hal the Vicious Brute and starts killing people and gets dubbed The Creeper, but then one day The Creeper meets a sweet little innocent blind girl who is nice to him, so he decides to use his power of robbery and murder to steal enough money for her to have the surgery that will restore her sight, but the police tell her that he's The Creeper, so she helps trap Hal, who tries to kill her, but he gets arrested and she gets promised her surgery. The end.

Mike & the Bots have fun riffing on this film, but don't make fun of the movie during any of the Host Segments. Well, that's not exactly true. They do pick on one of the actors because of his looks. And, no, not Hatton, but one of the actors who bore a slight resemblance to Tom Dewey. Didn't see that coming, did you?

They also have some fun with the short subject that was played to stretch this episode out to a full two hours (counting commercials). 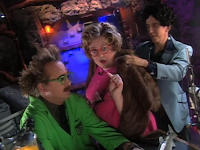 Rounding out the episode is Mrs. Forrester heading out on a date.

Who would date Pearl Forrester? Trust me when I tell you that you really don't want to know.

No, not Sandy Frank, although that would have been funny.

Anyway, Pearl has a date and Dr. Forrester isn't too happy about it. But, he's no more unhappy than are M&tB about having to watch

The Brute Man, so things work out in the end.

The Comedy Central era will be coming to a close in just a few episodes, but Season Seven has been a good one. So far.