For the second night in a row, the Savannah Sand Gnats (Mets) ruined the night for the Columbus Catfish at Golden Park. After being one-hit by Savannah last night, tonight, the Catfish outhit the Sand Gnats 10-8, but were outscored 7-4.

Defensively, it was not a night to remember. The Catfish committed 5 errors. And a fan committed one. More about that in a minute.

First, the good news is, the swelling is going down nicely.

Not mine. My grandson's. 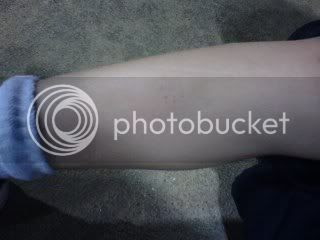 He went to the game with us tonight. And, you know the part where they say "Be aware of balls being hit into the stands?"

The ball came in so fast, he didn't have a chance to get out of the way. Hit him squarely in the leg.

Hurt like heck, but he still managed to get the ball.

And I have nothing but good things to say about the Catfish, including General Manager Ken Clary, who was quickly on the scene, kept my grandson calm, and got the nurse to look at him.

The nurse was great, too. And, in a few minutes, my grandson was running around, having a good time.

Back at the game, it seemed like everything that could go wrong, did. Except for injuries. My grandson checked that off the list.

The Catfish, though, suffered 5 errors. Six if you count the fan who interfered with a pop fly near the visitor's dugout. So we could check that off the list.

I've never seen a runner score from first on a strike-out. Until tonight. With two out and Savannah DH Darren Clark on first, having reached on an error, Catfish starter Glenn Gibson struck out Savannah LF Daniel Stegall. Catfish C Mike McCormick dropped the strike, then threw high to 1B Seth Dhaenens. The ball reached the right field corner, allowing Clark to score. So we could check scoring from first on a strike out off the list.

In the 4th, Savannah 2B Greg Veloz stole home as McCormick threw high while trying to throw out SS Matthew Bouchard who was stealing second. So we could check stealing home off the list.

And, in the 9th, the rains came, holding the game up for an hour. So we could check that from the list.

Yes, it was one of those nights.

On the positive side, the Catfish managed to keep it from being worse. On the five errors, Savannah only managed two runs. Nine Savannah runners were stranded, and one was caught stealing. Like I said, it could have been worse.

Catfish DH Stephen Vogt hit a 2-run shot over the left-center wall. McCormick went 3-for-4 with a double and a run scored. LF Reid Fronk was also 3-for-4, scoring two runs, and stealing three bases.

A bad night overall, but some good performances. The Catfish pitchers struck out nine. The bullpen recorded 5 of those, and allowed just one run.