All politics is relative 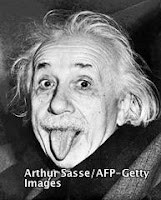 All politics is local.

Let's take a moment and think about one of Einstein's famous examples: the man dropping the ball on a train.

There's a man on a train. And you're standing outside the train, watching the train go by. And you can see through the walls of the train.

When the man drops the ball, he sees it fall straight down. But you, standing outside the train, see the ball fall in an arc. If you don't follow that right off, think about it for a minute; draw it out, if necessary.

But the question is: which view is right?

Both. It's relative to your motion whether the ball falls in a straight line or in an arc.

Think about Scott Brown and Mitt Romney. They're Republicans from Massachusetts. Normally, you'd think of a Republican as conservative. And, compared to most of Massachusetts, they are.

But move Scott Brown or Mitt Romney to a more conservative place. Like Georgia or Alabama. Around here, Brown and Romney would be considered flaming liberals. In this part of the country, there are Democrats that are more conservative than either of those two Massachusetts politicians.

California is pretty much the same way. What passes for a Republican in California would get you run out parts of Alabama or Georgia with a stick. And I'd probably be the person wielding that stick.

Sometimes I just shake my head and wonder about some of the people who pass for conservatives in some places. But, I have to remember that, like the ball on the train, it's relative to your position and movement.

So, I won't get all worked up about what some states do, as long as some progress is being made.

Massachusetts elected a Republican instead of a Democrat as U.S. Senator. Despite Brown not being what I'd call a conservative, that's an improvement from how things were.

And, if California elects a Republican instead of reelecting Barbara Boxer, that'll be an improvement.

That doesn't mean Mission Accomplished. It means Task Accomplished and the mission remains.

If the GOP picks up a boat-load of seats this November -- and they should -- they don't need to get cocky. And we conservatives need to keep the pressure on. How much energy should we expend to keep pushing the GOP to run conservatives?