Just whose slut is she anyway? 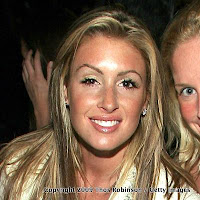 Why does a man who becomes rich and famous screw around on his wife?

But you knew that. But, if a man does that, he's to blame for whatever trouble comes his way.

But why does a woman screw around with a man that's rich and famous?

Because he's rich and famous.

But you knew that. And, she's to blame for whatever trouble comes her way.

But there's one aspect of this that I'm wondering about. Specifically, there's Rachel Uchitel. If I need to remind you who she is, she's was one of the Tiger Woods slut-puppies. She's the one that hired media-whore attorney Gloria Alred and said she was paid 10-million dollars to keep quiet.

Now, it turns out she was also screwing David Boreanaz. Her attorney explained that:


She understood that he was unhappy in his marriage and had been for some time and she had reason to believe that he intended to separate from his wife.

So, she was screwing David Boreanaz because he was leaving his wife for her?

Is that why she was also screwing Tiger Woods?

Probably not. She was probably screwing him because he is rich and famous.

Only, now do we refer to Rachel Uchitel as "former Tiger Woods mistress" or "former David Boreanaz mistress?"

Well, after pumping Tiger Woods for money (no pun intended), and attempting to get money from David Boreanaz in order to keep quiet, it seems to me that's a very complicated way of being a prostitute.

Normally, a prostitute screws someone and takes the money. Rachel Uchitel is screwing them long-term, then tries to extort money after the break-up.

So, cut through the complicated process, and she's still screwing someone for money.