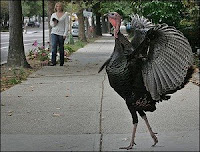 Not the country, the bird. And not just the bird, but the dead bird.

The Department of Homeland Security tweeted on Monday how dangerous it can be to fry a turkey.

And, in case you thought that someone left their computer unlocked and somebody tweeted it as a joke, they also put up a blog post about it.

The Department of Homeland Security, that great arm of Big Brother, knows that Islamic terrorists aren't so much of a threat. Sure, they want to kill us, but that's our fault. Just ask Ron Paul.

After flirting with the idea that right wingers were a threat -- not because of things they've done, but because there's the possibility that some right-winger might do something. Left-wing violence was never an issue. Sure, they've been shooting Congresswomen and crashing planes into buildings and raping hippies, but that's actual violence. The real threat has always been potential violence. Since the left has actual violence, and the right has potential violence, the right must be a bigger threat.

As DHS has so kindly informed us, the real threat is dead turkeys. They're evil. So evil, that after they're dead and frozen, they'll still try to burn down your house.

So, as we approach Thanksgiving, be thankful that we have a government department that wants to protect us from turkeys.