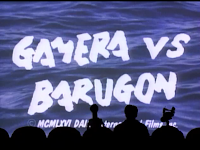 Another Gamera film, another KTMA redo. Episode K04: Gamera vs Barugon is the oldest surviving KTMA episode of MST3K, so, for MSTies, it's like one of the Dead Sea Scrolls. Which is kinda sad, when you think about it.

There's no Annoying Kid in Hot Pants running around, so the movie has this going for it. But, it doesn't have a Hot Japanese She-Villain. The leading lady isn't a villain, but a villager who travels to the big city. She does get weird with the whole blood-sucking scene. So, if you can ignore that...

The plot of the film, which is the most serious of the Gamera films, involves treasure hunters traveling to an island to steal a giant opal, which is really an egg, but they don't know it's an egg. One of the bad guys tries to kill the other two, and thinks he succeeds (one actually survives). On the trip back, the opal is exposed to radiation and grows into Barugon, who wreaks havoc across Japan. Barugon shows up, but is defeated. A bunch of plans are developed to beat Barugon, but all fail as new talents (huge tongue, shooting rainbows) are shown. Finally, Gamera recovers and defeats Barugon. The End.

The riffing is much better in this version than in the KTMA version, but that's to be expected. The Host Segments are funny. I loved the Mac vs PC opening. For the record, Servo is a Mac Head, while Crow is a PC Wonk.

The primary PC OS was MS-DOS 4.01, which sucked. DOS 5, which wasn't released until after Windows 3.1 was released.

I'm still not a fan of Gamera movies, but I do like what J&tB do to them. Having said that, this is the best of the Gamera movies. Which is sort of like saying which World War II Axis Powers leader is your favorite (King Carol II, if I had to pick).