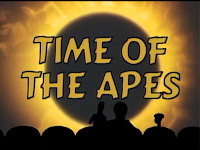 This one is another KTMA re-do. We covered Episode K17: Time of the Apes in December. Here's a little about the movie:


Back in 1974, there was a TV series in Japan called Saru no Gundan (Army of Monkeys). It was not a rip-off of Planet of the Apes, though, because in Planet of the Apes, astronauts landed on a planet populated by apes, that turned out to be Earth in the far future. In Saru no Gundan, a woman and two schoolchildren wake up in the future on Earth populated by apes. Totally different.

In the 1980s, someone decided to put some of the episodes together and call it a movie. Then, Sandy Frank (who else) brought a dubbed version to America and called it Time of the Apes.

In that episode, Servo and Crow riffed the movie alone. The storyline was that Joel was locked outside the Satellite of Love. In reality, Joel Hodgson was out of town for that episode.

Let me try to make sense of the plot of the movie.

An earthquake during a visit to a cryogenics lab results in a woman and two children being locked inside chambers and waking up in the far future, just like Fry on Futurama. Oriental apes rule the world and want to kill all humans, who escape and meet up with Godo, another human who's being hunted by General Gaba, who thinks Godo killed his wife and son. The Commander/Excellency, who looks like Colonel Sanders, wants to save the humans so he can kill them or something. A little white-face monkey named Pepe, who turns out to be a girl, helps the humans until they give her back to her mommy. A flying saucer shows up, plays a movie of the General killing his own son (oops!), much to his surprise. The humans meet Multivac or something, then go back into freeze, and the original three wind up back where they started. Godo walks alone in the desert. The woman and the kids have ice cream. The End.

If you think I'm not giving an accurate synopsis of the film, go ask someone who's seen it. They'll back me up on it. The plot is hard to follow. It being made up of scenes from 20 different episodes of a TV show makes it harf to follow. Translating it from Japanese to English didn't help. And, cutting it down to fit within the confines of a TV show made it that much worse. Bad movie. Really bad movie.

Oh, and there are no Hot Japanese She-Villains in this movie. The Hot Japanese Chick is one of the protagonists of the movie. Not the same thing. Close, though.

It was fun hearing Joel riffing this one. Of course, Kevin/Servo didn't riff the KTMA version, either; Josh/Servo id. Only Trace/Crow riffed both episodes.

There weren't a lot of repeat riffs that I caught from both episodes. The only one that stands out is the "Ebony & Ivory" reference.

The Host Segments were completely unlike the KTMA version. During that episode, they focused on Joel being "missing." During this episode, they were all related to the movie, from the "Why doesn't Johnny care?" skit, to the Inherit the Wind skit, to the monkey fashions skit.