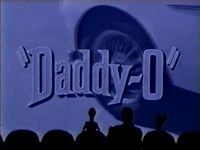 Another episode that has never been released commercially. My copy is, therefore, from a recording of a broadcast of the episode at 2:00 AM on November 29, 1991.

I didn't know it until I played it for this review, but my copy (a fan copy, but not through MST3KVideos.com) had a problem with the sound. It slowly gets out of sync beginning early in the episode, and is about 6 seconds off by the end. I used a video editor to strip the audio then adjusted the audio by a .1%, then exported the video. It pixelated the video a little, but at least the video and audio are now in sync.

I then decided to obtain a copy from MST3KVideos.com. It should arrive soon. I'll check to see if there are any significant differences between my new copy and my old copy.

With this episode, we get our first short of the season: Alphabet Antics. It's, um, different. And, at the end, it goes straight to the movie with no break in-between. At least in my copy, there's no discernable break between the short and the opening of the movie.

This movie actually has a plot. Daddy-O and Hot Chick meet on the road and try to run each other off. They race for pizza, but Daddy-O's best buddy ends up being killed in a totally unrelated crash. Cops suspect Daddy-O, but figure out he didn't do it. Daddy-O suspect Hot Chick, but figures out she didn't do it. Sidney hires Daddy-O to sing and drive drugs. Oh, yeah, Daddy-O sings with his pants hiked up real high. Anyway, Daddy-O figures out Sidney killed best buddy, and decides to make him pay. He goes along with the smuggling operation, but nearly gets caught, changes his shirt in the middle of a chase, but finally helps cops arrest Sidney. He gets the girl. The End.

The riffing is consistently good. Not many episodes where you get Buster Keaton, Steve Allen, and Frank Sinatra in the band, with Lou Reed in the audience. Oh, and lots of Orson Welles references.

And butter. Lots of butter.

Joel has his goatee again. Or, the beginnings of one.

And we get to see more of Deep 13 than normal. The Mads are still baby-sitting the Miracle Growth Baby in the Invention Exchange, prompting the Alien Face Hugger Teething Nook.
At the end of the show, Frank and Dr. Forrester have trouble with the credits. Lots of trouble. The button is pushed, the credits start, the button comes undone, back to Deep 13. Rinse. Repeat.

This happens several times, and goes on for several minutes. I suppose they ran short, didn't want to show another short or serial, so they extended the final segment.

It worked. That segment alone is one of the funniest I've seen.