Cartoon of the Day - Manhunt 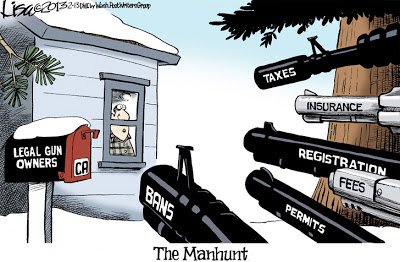 If you don't understand the left's logic, I can explain it to you. They're idiots. Some people call them dumbasses, which is probably a better term. Some call them useful idiots. Those that call them that are the ones using them to their own ends.

I gave up trying to figure them out a long time ago. I accept the fact that they have a severe case of the dumbass and I accept that there's a good chance they won't recover from it.

In the meantime, those using those useful idiots are trying to take away our rights. We're the ones under the gun, while criminal elements are running free. And some of them are running free in positions of power.
By Basil at 2/13/2013 10:00:00 AM