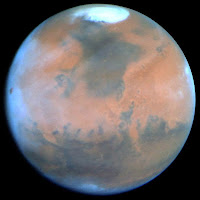 Dennis Tito wants to go to Mars. In fact, he says he's blasting off to head to the Red Planet in January, 2018. Look at a calendar; that's less than five years from now.

I know what you're thinking: Who the heck is Dennis Tito? Well, he's the guy that, in 2001, paid the Russians a bunch of money to take him to the space station. He's the first private citizen to go to space. Now, he wants to go to Mars.

I kinda got my doubts about the feasibility of a trip to Mars, at least right now. But, hey, it's his money; he can do what he wants with it.

But just wait until the liberals find out what an investment consultant is planning. They'll throw a hissy fit. Someone like Dennis Tito wasting all that money on a trip to Mars when the government could waste that money right here on Earth.

I'm kinda with the liberals on this one. Kinda. Let me explain.

I think the first person to Mars should be Barack Obama. I mean, he's as well-qualified to be an astronaut -- or would he be a cosmonaut? -- as he was to be elected president. Or to win the Nobel Peace Prize. Or... well, anything he's done. His lack of qualifications haven't stopped him from being all these other things, so why should they stop him from being the first man to Mars?

And, we shouldn't wait, either. Send him now. Tomorrow. Heck, send him today.

Sure, there are some problems with the physics involved, since the positions of Earth and Mars right now make the trip a little difficult. But, if they simply put a "Physics-Free Zone" sign on the rocket, he'll get there and back in around 500 days. Maybe even less.

There's also the problem of oxygen. Obama would need oxygen. A lot of oxygen if he talks a lot. But, as wonderful and magical as he is -- giving us free phones and food stamps and such -- I bet when he breaths out, it's not carbon dioxide, but even more oxygen. So, that problem is solved.

Of course, there's the issue with food. [See previous paragraph and apply to this topic because I don't really want to write about that.]

Anyway, I say we send Obama to Mars.

There's the whole problem with space radiation exposure during such a long trip. What if the 1950s movies were right, and it caused Obama to grow to incredible size when he gets back to Earth? He'd go crazy and destroy everything.