Sometimes, the Wife and I will stop for breakfast at McDonald's. I like the Sausage McMuffins, and the Sausage, Egg & Cheese Biscuits.

We'll sometimes hit the drive-through. That's when I get the biscuit sandwiches. Or the McMuffin thingy.

But, sometimes, if we have time -- which means if we leave for work early enough -- we'll go in, sit down, and eat.

That's when I get the Big Breakfast or the Deluxe Breakfast.

The thing about McDonald's is that you know what you're going to get. And get the same quality food every time.

Now, sure, it's not great food. I mean, unless you're a pre-teen, it's not a big deal to go eat at McDonald's.

Still, the food's actually pretty good. Not necessarily good for you, but I don't care. It's as good as any food at any other place to eat. Unless you eat at one of those hippie joints where the lack of good food makes your brain go soft so that you vote for Democrats.

Eating at McDonald's is fine. And it's a great place to take the kids. Or the grandkids. And the breakfast is pretty good, too.

Okay, to tell the truth, I like Hardee's breakfast better, but McDonald's is on the way, and it's still pretty good.

And like I said, you can take the kids.

Most of the time.

Sometimes, you run into things you usually only see at a Wal-Mart at 2:00 AM. 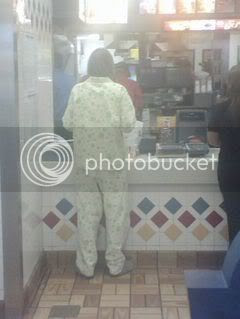 The Wife and I left for work early, and decided to eat breakfast on the way. And we stopped at McDonald's.

We went in, ordered the food, then sat down to eat.

I went back to get a refill on my drink, and ran into the Pajama Woman.

I don't know if she shows up at McDonald's in her pajamas a lot. I just ran into her the one time.

So, I'll still stop on occasion at McDonald's to eat breakfast.

I'm not looking forward to running into her again.