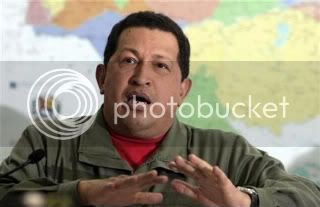 "He goes and accuses me of exporting terrorism: the least I can say is that he's a poor ignoramus; he should read and study a little to understand reality," said Chavez, who heads a group of left-wing Latin American leaders opposed to the U.S. influence in the region.

It ought to be interesting to see how this one plays out.

In this little battle of words between the two leading socialist presidents on the American continents, who will get the support of Hollywood?

The dust-up between those two peas in a pod won't last long. They'll take their sights off each other soon enough.

Chávez has terrorism to export.