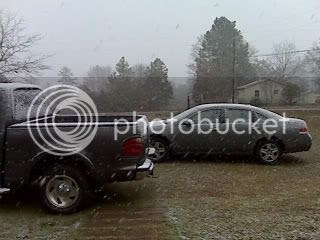 We don't get much snow.

But, it snowed this morning.

I got up early, and tried not to make too much noise as I turned on the TiVo.

Later in the morning, I heard a noise come from the bedroom. Then, footsteps.

The door flew open, and out came running ... The Wife.

I thought something was wrong, at first. Then, I noticed the look on her face.

She threw open the door and gazed at the snow falling.

It took her a minute to realize she had on just her nightgown. I noticed right off. Perhaps it was the cold.

I grabbed my Blackberry and snapped a shot of the snow falling on the car. 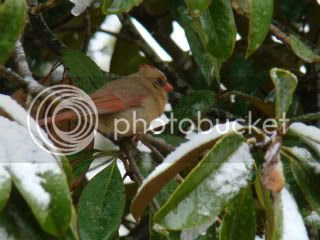 She threw on some clothes and grabbed her Sony camera, taking several pictures of the falling snow.

And the animals. Not just her ducks and goats, the wild birds, too.

Of course, she made some phone calls. She gets excited about snow.

I've pulled guard duty in knee-deep snow on a mountainside in Korea. I'm not a big fan of snow.

But, we're lucky here. When we get some snow, it's not a lot; just enough to cause children's eyes to widen.