Cartoon of the day - Myth of the Year 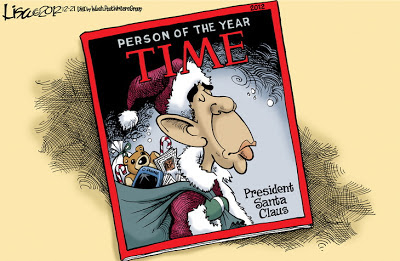 Parents tell children that Santa will bring them stuff. But the parents actually take their hard-earned money and buy the stuff for the children. And the children thank Santa Claus.

Okay, I see the difference. Obama tells his followers that he's giving them stuff, but we're paying for it. Santa doesn't do that, because, well, he's not real. With Santa, we make up the myth. Obama and his supporters make their myth.

In the whole Santa Claus mythology, we give the stuff one day a year. In the Obama mythology, he gives our stuff every day of the year.

In both cases, people that work for a living pay for the stuff.