Cartoon of the day - spending 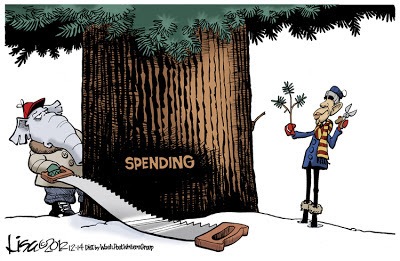 Taxes aren't the major problem. They're a problem, to be sure, not in the way liberals, Democrats, and others with defective thinking think.

Taxes don't need to be raised. Spending needs to be cut. Drastically.

Obama and his crew, though, aren't serious about cutting spending. Because it will cut "entitlements."

Here's a secret: people are not entitled to entitlements. The name itself is a lie. It's a "feel-good" kind of thing that makes the economy feel bad. Heck, not just feel bad, but be in intensive care.