Cartoon of the day - unions 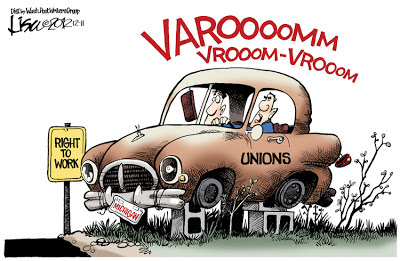 When I think unions and automakers, I think Michigan. And Michigan -- particularly Detroit, home of the automakers -- has had some serious troubles.

But, Detroit -- and Michigan -- aren't the only places vehicles are made. Just up the road from Columbus, in West Point, Georgia, Kia makes vehicles.

There are other vehicles made in other states, of course, but I bring up Kia for a reason. Georgia is a right-to-work state. That is, you don't have to belong to a union. You can be, but if you're not, you aren't denied the right to work.

Earlier this year, I was heading to work, and got behind a vehicle with a Michigan tag that had an Obama sticker on it. I ended up behind that vehicle all the way to the company parking garage.

That's when I realized that someone from Michigan, where the policies of the left have made it so difficult to get or keep a job, had moved down south to work in Georgia. And, had brought their politics with them.

Those same politics that made unions so powerful and government so big and had brought the economy up there down? Yeah, they wanted to spread that around here.