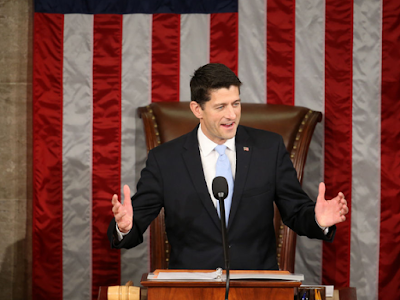 Ladies and gentlemen, as Speaker of the House of Representatives, it gives me great pleasure to introduce the President of the Senate, the Honorable Joseph R. Biden. 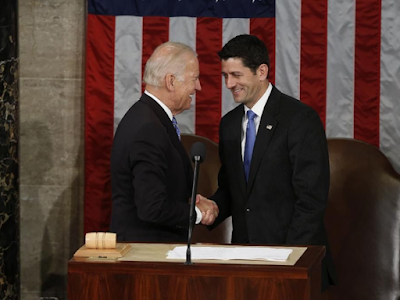 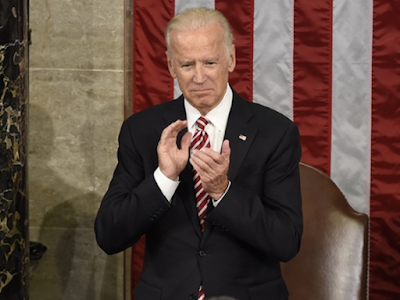 So, we vote now, right? I was thinking onions, mushrooms, and bacon. Oh, and extra cheese. What about you guys?

Oh, is Barack here, too? I suppose that means no bacon.

No, I'm addressing you as president of the Senate. While the Senate is in session, as it is now with the House, you are presiding. So we call you Mr. President. And you call me Mr. Speaker.

"Paul Speaker?" That's a funny name. Anyway, are you telling me that all this time, I didn't need to worry about Barack watching me? Jeez. I wish someone had told me. So, is he here? Do we get bacon or not?

Mr. President, we're not here to vote on pizza.

It's one o'clock and it's a Friday, Mr. Speaker. I'm thinking extra-large. There are more here than I realized. How many is this? About 50?

We better get two pizzas. And bread sticks.

Joe, we're here to open the electoral votes to select the president.

You just told me I was president.

Didn't I do a good job? I've seen my picture all over the Internet. I must be doing something right.

Listen, Joe, it's time to open the votes and count them.

Oh, okay. I hope we get bacon. I'm tired of pepperoni. So, how do we do this?

The same way we did four years ago. You have the ballots in front of you. Open them in alphabetical order and read the total. Hand them to the tellers, who will record the totals. When all the states are counted, they'll add them up and give you those totals, and you announce the next president and vice-president.

Alphabetical? So, we start with Delaware, right? Why is Alabama on top? Delaware is the first state.

No, Joe. Alphabetically, it's Alabama, followed by Alaska. Delaware is, let's see, 8th on the list.

No, that's not right. Delaware is the first state. I know my algebra.

This is the order they want us to read them, Mr. President.

Okay then, Mr. Speaker. We'll do it that way. But I do get extra cheese?

Joe, I've just been informed that an extra-large pizza with onions, mushroom, bacon -- and extra cheese -- has won. If you'll follow me to your car, we'll head over to ... um ... Amy's ... and introduce you.