Dear #NeverTrump (and others): STFU 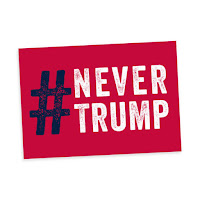 Anyway, one group of people, a group that consists of many people I've read online and respected for years, has really frustrated me: the #NeverTrump crowd.

Now, I don't consider myself a #NeverTrump member. No, I didn't support Trump with my vote, my money, or any thing else, because I don't like the idea of a liberal who has been a huge supporter of Democrats over the years being in the White House. So, I'm certainly not pro-Trump.

However, many many people see this as a choice between Trump and Clinton. And I can't disagree with that. Well, not and be honest in my assessment. Which is why I'm so frustrated by the #NeverTrump crowd. And have been silently shouting "STFU" for months now.

It's not that what the #NeverTrump crowd is saying about Trump isn't true. Well, most of it's true. Some is just plain crazy, but you can figure out who the crazies are on your own. It should be obvious. And they should always STFU.

No, I'm talking about the ones that are normally straight-thinking individuals who are dissatisfied with Trump as the nominee of the GOP. I'm not happy with Trump being there, so I understand that. What I don't understand is the way the attacks on Trump, and the proudly waving the #NeverTrump banner, has obsessed them.

The reason? Simple. Who benefits? If they are successful in turning people away from Trump, where will most of those turned turn?

Now, some say there's no difference between Trump and Clinton. Remember I said some were just plain crazy? Yep. Those are the ones. As awful as Trump is -- and he is -- he is not as awful as Clinton.

Now, I'm not saying choose the lesser of two evils. I'm saying you don't have to limit your choices. Of course, none of the candidates that are on all the ballots nationwide are great candidates. Heck, I can't find a good one. No, I'm not a fan of Libertarian Party candidate Gary Johnson, either.

To my main point, though, is the #NeverTrump crowd that thinks Trump is as bad as Hillary is wrong. They are not the same. That's like saying one felony (kidnapping) is as bad as another (murder). Both are bad, just not equally bad.

So, the #NeverTrump crowd that focused solely on the negatives of Trump instead of the positives of an alternative candidate, I'm no longer quietly saying STFU. I'm simply saying STFU.

And not just the #NeverTrump crowd. There's the Trump-obsessed fanboys and fangirls that are constantly posting poorly-spelled missives saying how great Trump is and how awful people who haven't mortgaged their houses to finance his campaign and aren't constantly singing Trumps praises ... well you can STFU too.

You aren't going to win any friends -- or more importantly, votes -- by being an ass. You seem to forget that a reluctant vote counts just as much as an enthusiastic vote. But that's not good enough for you. You clowns remind me of those mindless Obabambots and Paulbots of the last couple of election cycles.

Not all Trump supporters fit into this, to be sure, just like not all #NeverTrump crowd members are stark-raving insane.